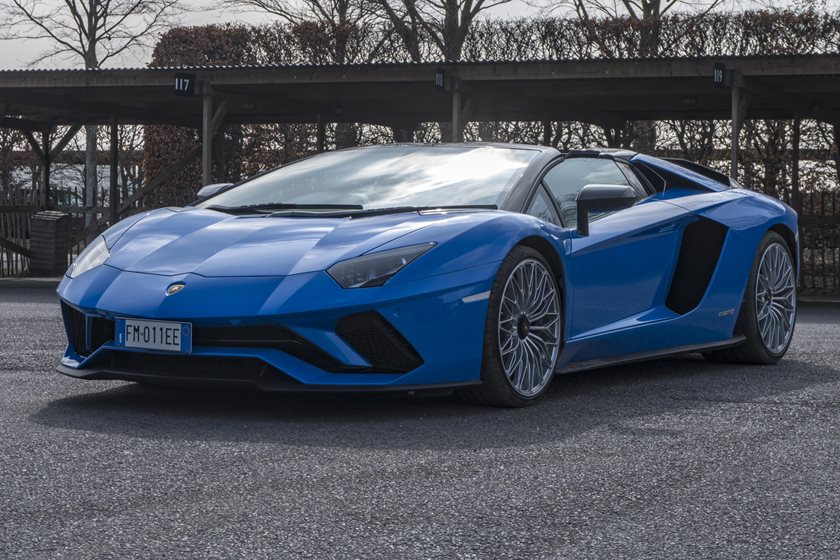 Jeremy Clarkson says that Lamborghini builds better cars than Ferrari. That’s some tough talking words from a man that’s driven practically every car worth driving. The Urus super-SUV is the current automotive cause celebre; its very existence has fueled heated public debate, while the lucky few that have driven the 200-mph truck proffered mixed reactions. Top Gear loved it. Clarkson did not. We will have our chance to opine on the world’s fastest SUV soon enough.

In the meantime, we drove the car that everyone loves: The Lamborghini Aventador S Roadster. The poster car of our generation, innocent children are transformed into lifelong gearheads by the mere sight of it, so strong is the allure of the Italian exotic. The Huracan has done a fine job attracting first-time Lamborghini owners, and more women, to the brand. And Lamborghini expects the Urus to double down on that effort. Despite those from an analogue age decrying the VW Group for diluting its premier supercar brand with such models, Lamborghini continues to make outrageous, otherworldly machines and has no intention of stopping.

For a shade under half-a-million dollars, the 2018 Aventador S Roadster represents the latest in a line of V12 beasts from Sant’Agata Bolognese. Sharp-edged and unapologetically brash, despite approaching the end of its ten-year lifecycle the Aventador remains one of the best-looking cars on the planet, turning heads regardless of its company. And at the Goodwood Media Drive last month, it was in very good company indeed. Wearing a stunning Blu Nethuns paint job with bright silver alloys, the iconic Lamborghini doesn’t just scream for attention, it positively bellows from the depths of its 740-horsepower naturally-aspirated powerplant. Which is what you want from a $460,000 supercar.

When Lamborghini CEO, Stefano Domenicali, unveiled the droptop supercar at Frankfurt late last year, he said “The new Aventador S Roadster offers the thrill of open air driving without compromising on driving dynamics or the occupants’ comfort.” Everything about the car is designed to offer a sense of drama. Opening and closing the scissor doors. Flipping up the start-button shield like a fighter pilot lifting the safety to launch a missile. Pressing the starter and, after a moment’s pause, listening to the 12 cylinders sitting directly behind your head literally explode into life, the combustion of 6.5 liters of air and gasoline making itself heard though three massive exhaust pipes. 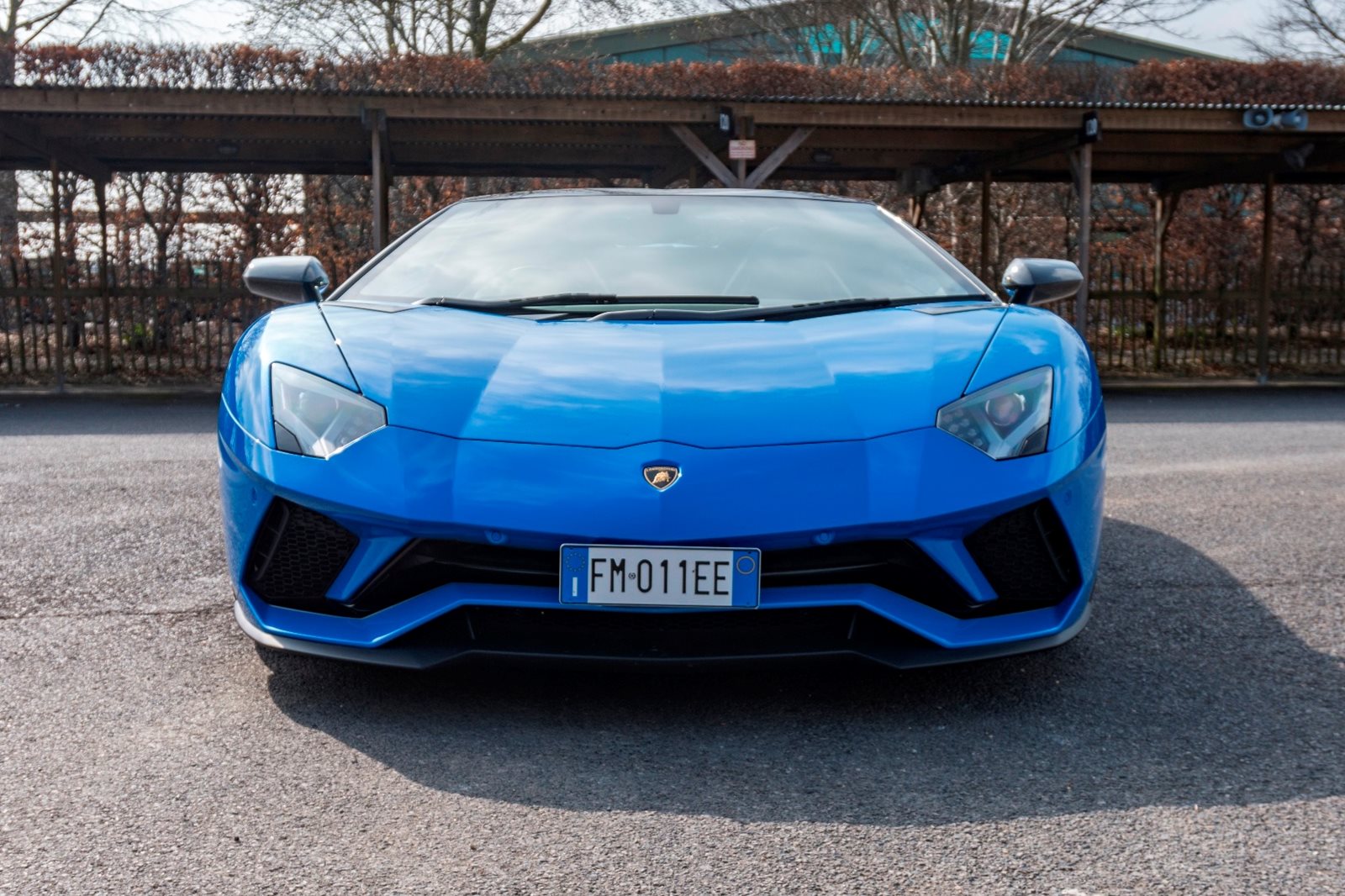 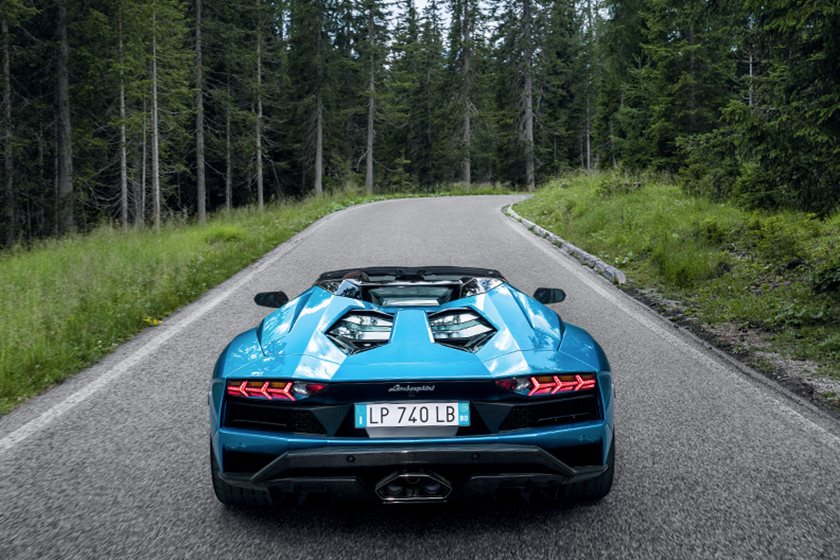 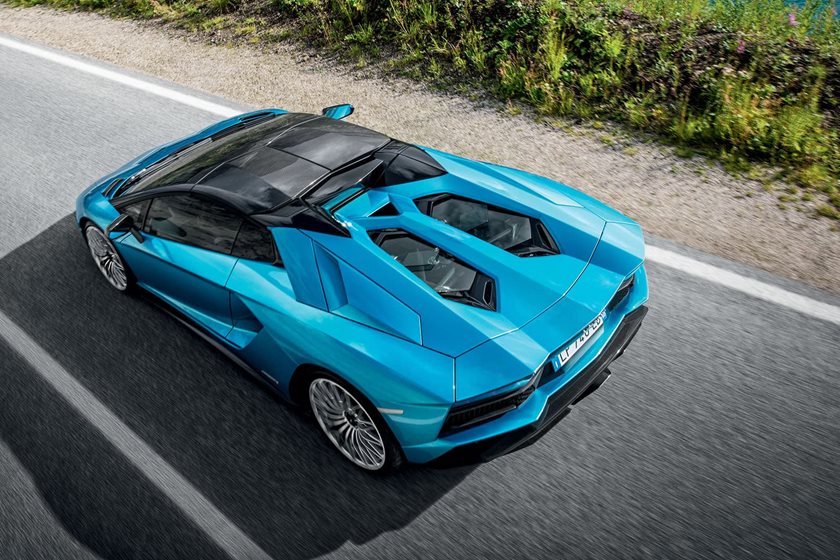 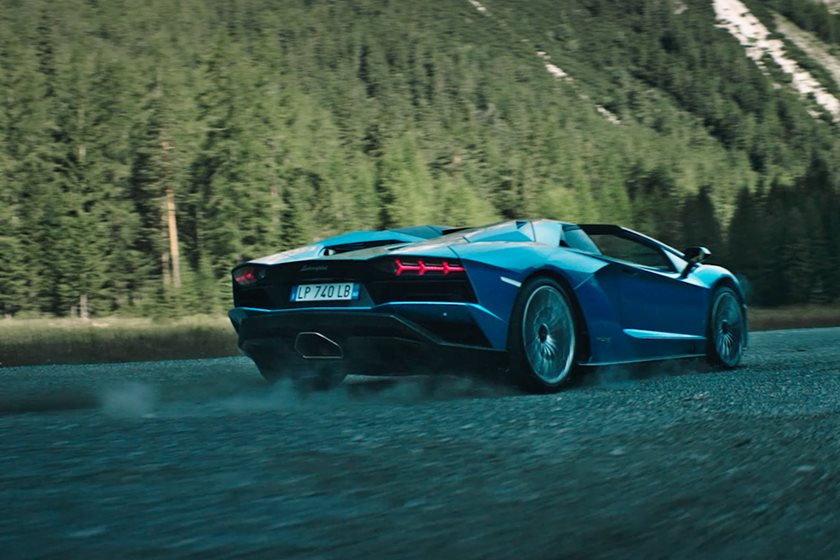 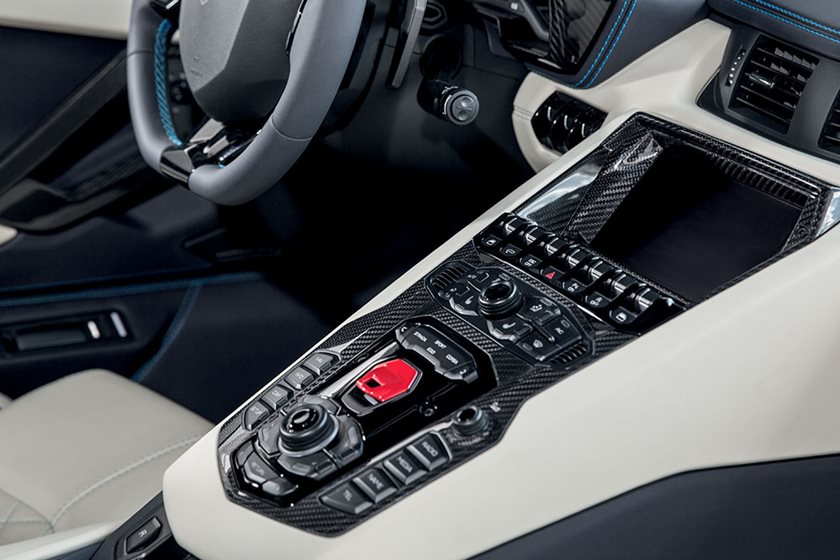 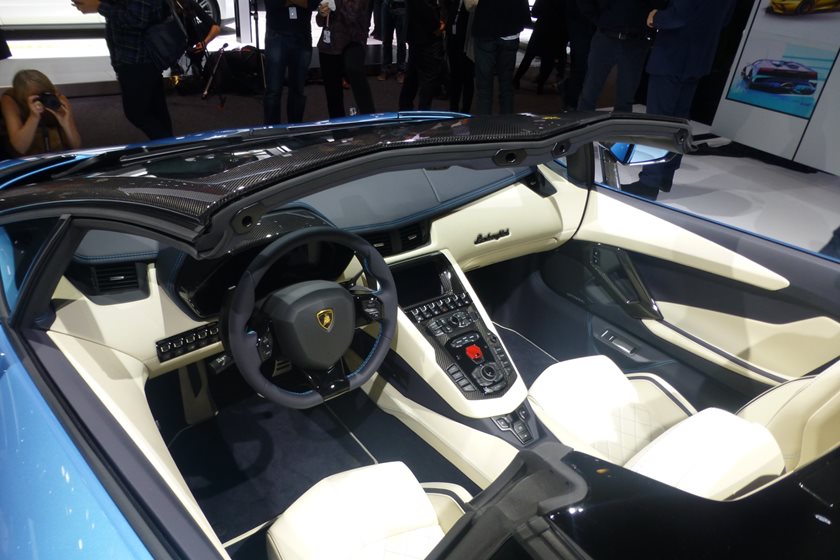 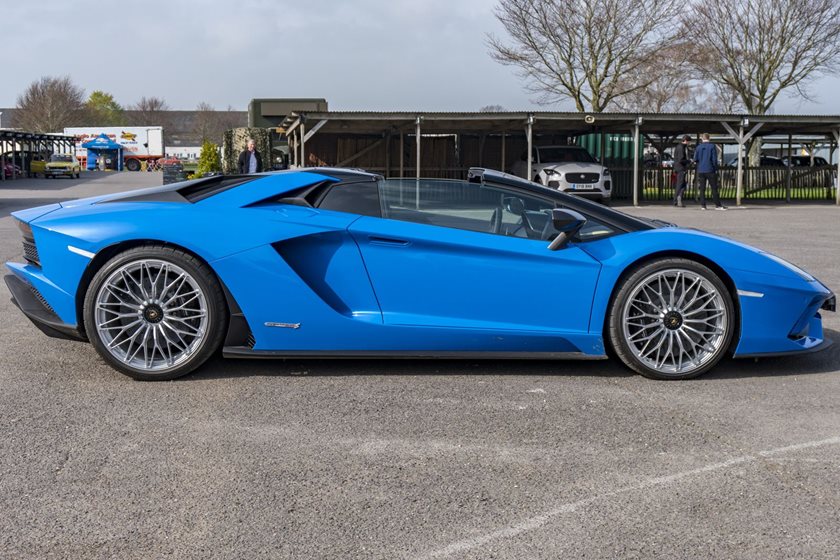 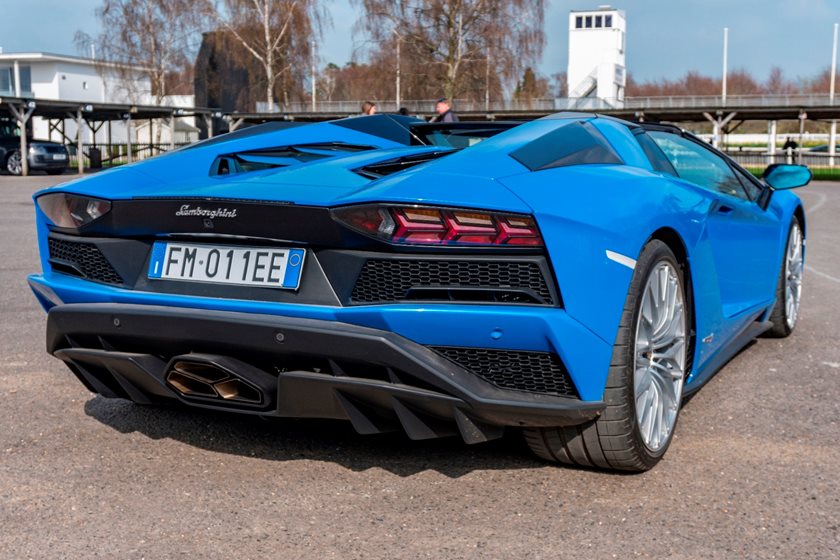 All that before you’ve even engaged first gear. Most buyers will opt for the Roadster over the Coupe presumably to enjoy the sun overhead while piloting the supercar, and not for the aural pleasure the V12 delivers. Despite the UK’s perpetual bruised skies, drivers here love convertibles – more so than anywhere else in Europe in fact – and when the sun is shining, like it was on this glorious day at Goodwood, it’s easy to see why. Roadsters are always a treat to drive on a sunny day, especially when there’s a naturally-aspirated V12 behind your head. It’s a special combination, and one exclusive to the Aventador S Roadster being the only mid-engine V12 convertible on the market.

Not only does the lack of a roof make maneuvering into what is one of the best-looking cabins on the market that much easier, it also gives the car an extra cool factor. As if it needed one. Anyone around six-foot or taller won’t be happy with head and foot room after a couple of hours on the road. With the roof tucked away in the front trunk, there is no trunk space. At all. Nor is there any storage compartments in the cabin save for a baby glove box. Opt for the optional Travel Package, however, and at least you’ll have somewhere to put a drink courtesy of a removable cupholder that sits neatly on the passenger side of the center console. A long distance cruiser or daily driver the Aventador is not. But nor does it pretend to be.

As Lambo’s boss says, this is a car born to thrill. It doesn’t have a practical bone in its beautiful carbon-fiber body. 0-62 mph comes in a three seconds flat (the S Coupe does it in 2.9) en route to a 217 mph top speed. In upgrading to the S model, Lamborghini gave the Aventador an additional 38 horsepower and a new EGO setting that offers drivers the chance to customize a range of settings including suspension, steering, transmission and engine. The most crucial update is a new four-wheel steering system that can virtually shrink the wheelbase by 20 inches, helping to hide the extra 110 pounds the structural reinforcements add to the S Roadster’s curb weight. This was most acutely felt on the narrow, twisting roads around the Goodwood estate.

With the rear axle steering in the opposite direction of the front, the hulking blue mass with 355-mm rear tires felt nimble around corners, and beautifully precise. Get up to speed, and the axles rotate in parallel, virtually increasing the wheelbase, providing greater control and stability. The magneto-rheological front and rear shock absorbers with pushrod system help deliver a compliant ride, constantly adjusting to road conditions to eliminate any undesired body movements. While the Lamborghini appears an intimidating proposition, it quickly instills confidence as long as you don’t mind changing lanes without glancing behind you first.

Like the Coupe, rear three-quarter visibility is practically non-existent. But that’s what the side mirrors are for, right? While Lamborghini has done a commendable job at refining the Aventador, the seven-speed automated single-clutch gearbox tasked with sending 740 horses to the all-wheel-drive system does have issues with power delivery in certain modes. In Strada, shifts are smooth enough, but become jerky through the lower gears in Sport. The accompanying bangs and pops make you forgive the brute for punching you down the road, but we suspect a dual-clutch transmission will be offered in the Aventador’s successor to put it on par with the likes of the McLaren 720S and even its Huracan stablemate.

In the meantime the Aventador S offers an almost old-school supercar driving experience. Lamborghini has certainly put the wild bull through obedience school, it just sat at the back of the class not paying attention. The Aventador S Roadster is the Lamborghini for a certain type of buyer. The Hurcan and Urus will be easier to live with, the Huracan Performante will offer the purest driving experience, but the Aventador makes the biggest statement. A feast for the eyes with its snake-like front end fangs and otherworldy rear, onlookers were left in awe as I sliced through traffic like a samurai sword. Having driven the Aventador Coupe a year ago, witnessing such reactions was a not a new experience.

The Lamborghini Aventador S Roadster is among a handful of cars that leaves a lasting impression on those that encounter one in the real world, the image forever etched into their cerebral cortex. Impossible to live with everyday, but for short bursts of unadulterated joy behind the wheel, not many can beat it.