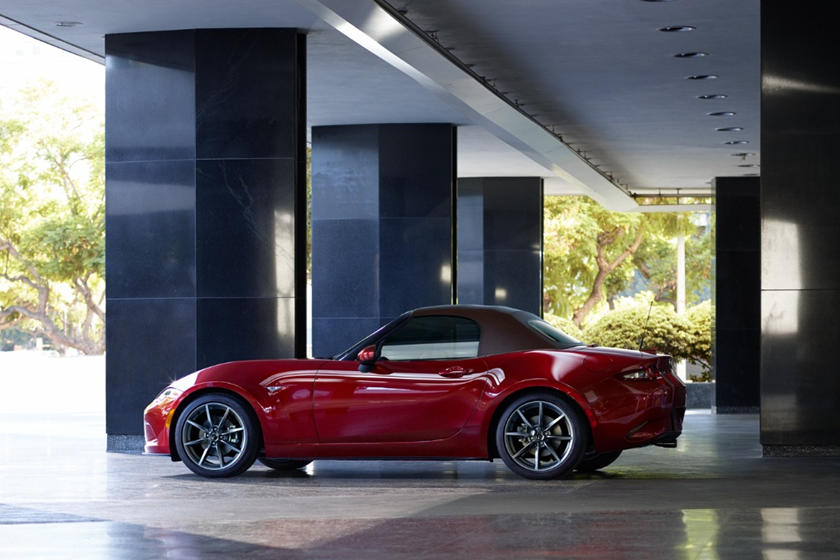 How could the Miata get even better? Just add a higher redline!

Belting through the Angeles National Forest, a twisty string of peaks and turns awaits with the warm glow of the California sun peering through the open cabin of the new 2019 Mazda MX-5 Miata. You should have seen my smile. It was enormous. In third gear, as I approached a straight bit of road, the car continued to build revs – 5,000 rpm. Oh boy here it comes, 6,000 rpm. Damn it must be time to change gear. At 6,800 rpm last year’s model has been left behind weeping. 7,500 rpm and… change. My spine still hasn’t stopped tingling. Bravo Mazda, you’ve managed to make the Miata even better.

When the rumors of a more powerful Miata first emerged, I was a bit skeptical that is was really going to happen. Fast forward to the official announcement from Mazda and my excitement simply could not be contained. The Miata has long since been one of my favorite sports cars. I have even owned a 2006 NC generation car. So when Mazda asked me to come to California to drive the refreshed 2019 model around some of the best roads in the country, my response was simple – Miata Is Always The Answer.

Although this 2019 Miata is new, it isn’t all new. From the outside, you probably won’t be able to tell the 2019 Miata apart from the 2018 model, unless you notice the little backup camera that now sits prominently on the rear bumper. Mazda hasn’t wasted any time fiddling with the Kodo design or fussing over the interior layout. Instead, the engineers have focused solely on what diehard enthusiasts have been begging for: more power.

The big headline here is 181 horsepower and 151 lb-ft of torque – improvements of 26 hp and 3 lb-ft of torque over last year’s car. As I previously mentioned, the redline has increased from 6,800 to 7,500 rpm. Even with this nice bump in power, Mazda has managed to make the Miata more efficient, which is truly an engineering feat.

Mazda didn’t achieve these impressive gains by simply bolting on a turbocharger or increasing the displacement. The engineers had to be a bit more clever than that. The updated engine has reduced internal mass and friction courtesy of lighter pistons and connecting rods. It also has a shorter intake manifold, a larger exhaust manifold, a better-balanced crankshaft, and the list of improvements goes on and on. 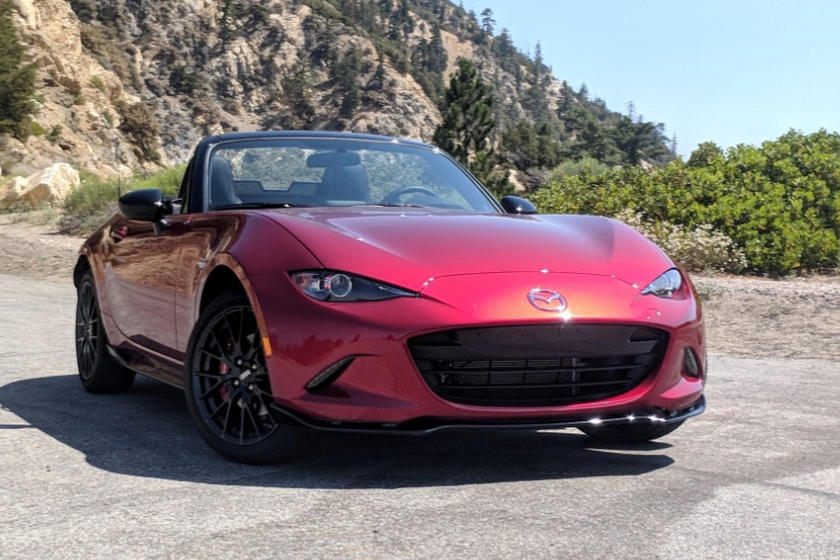 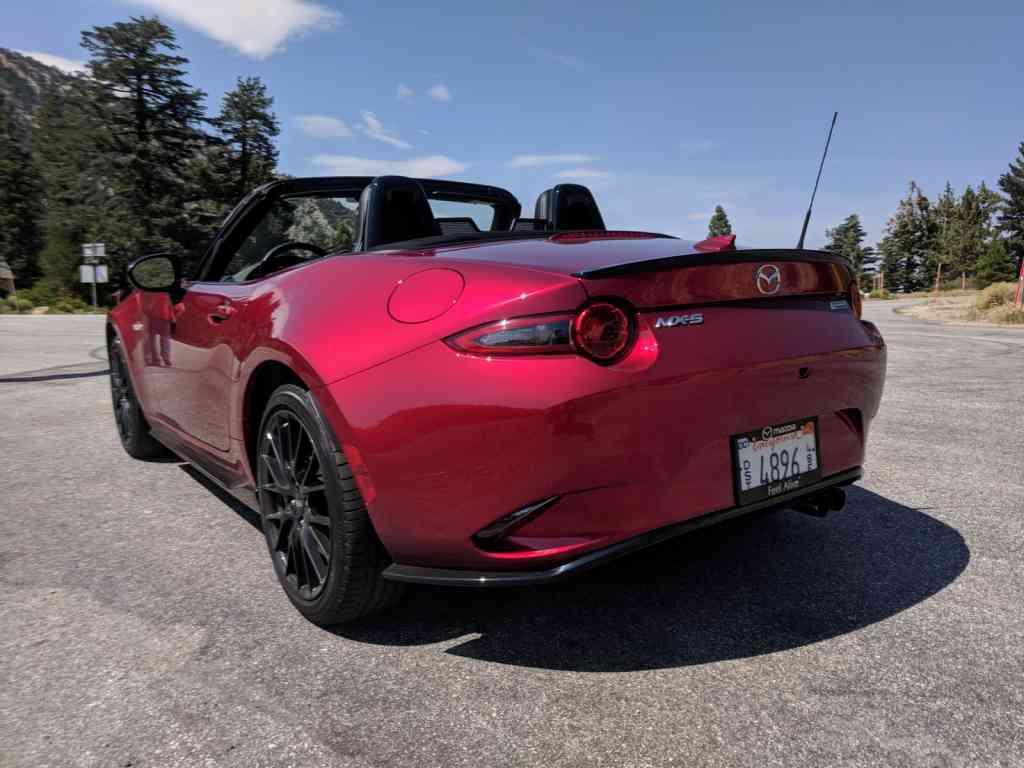 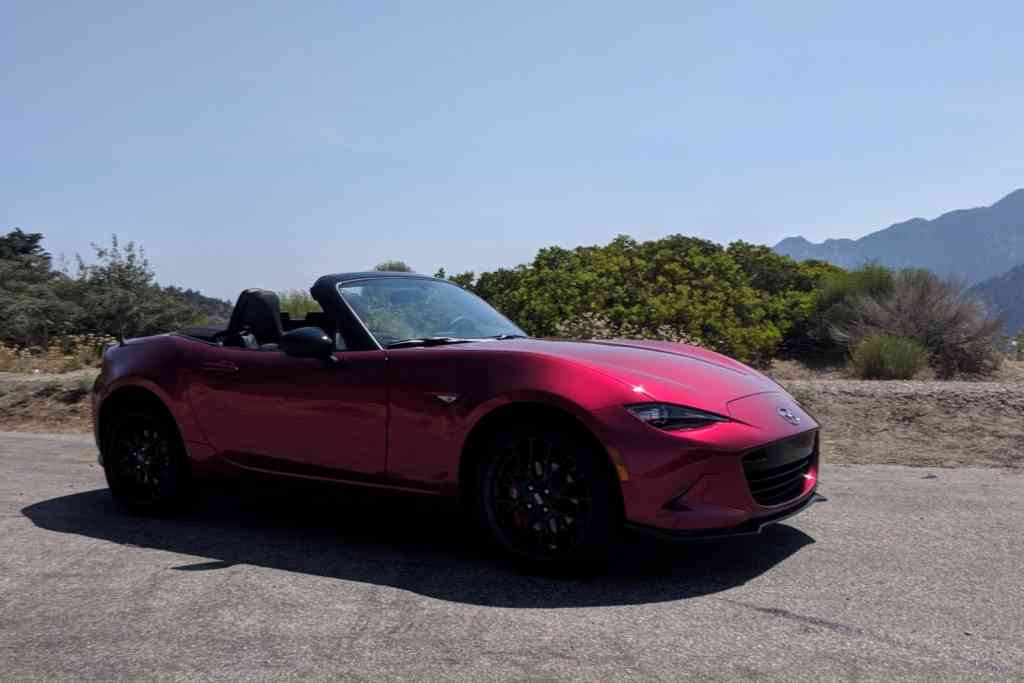 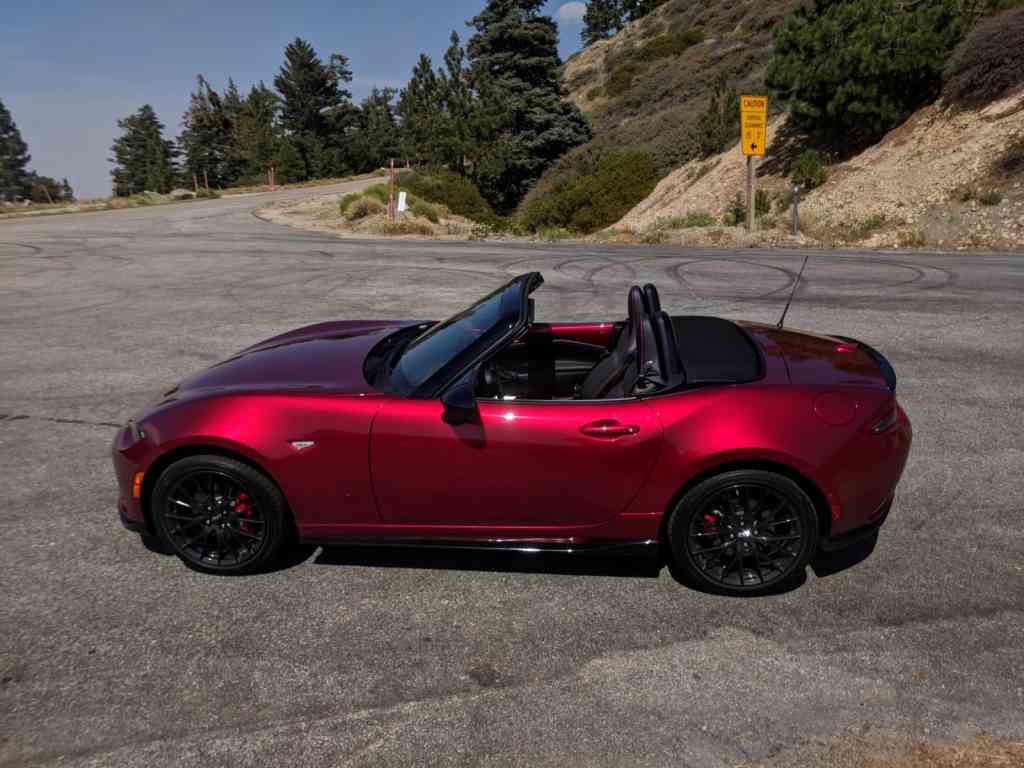 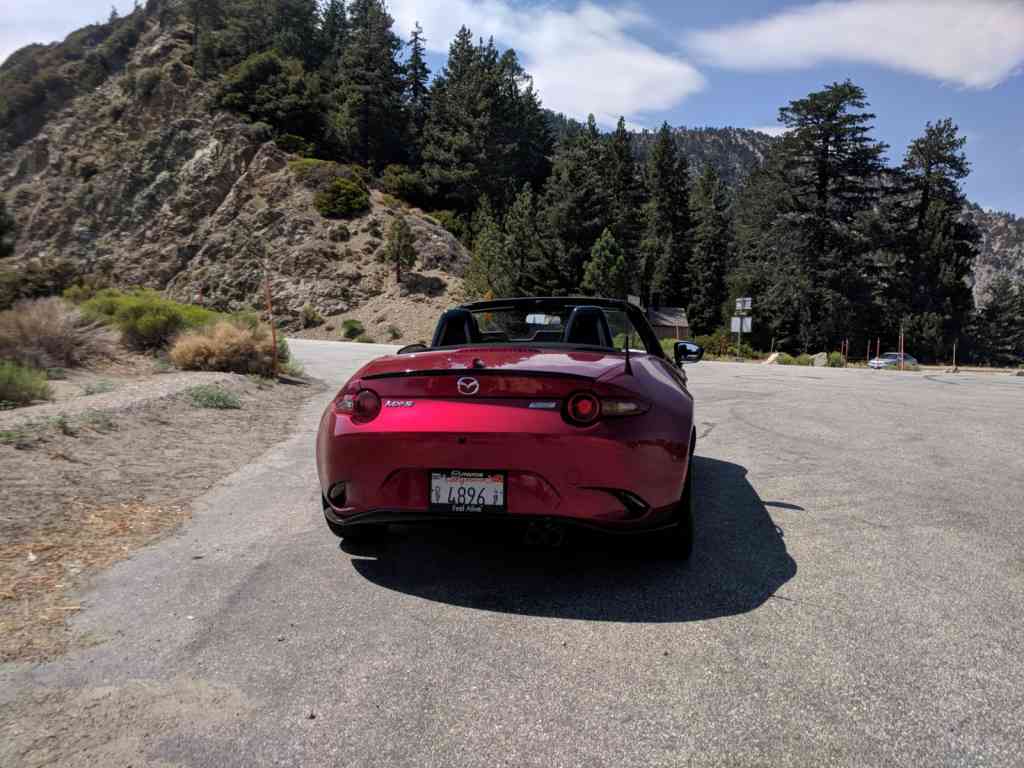 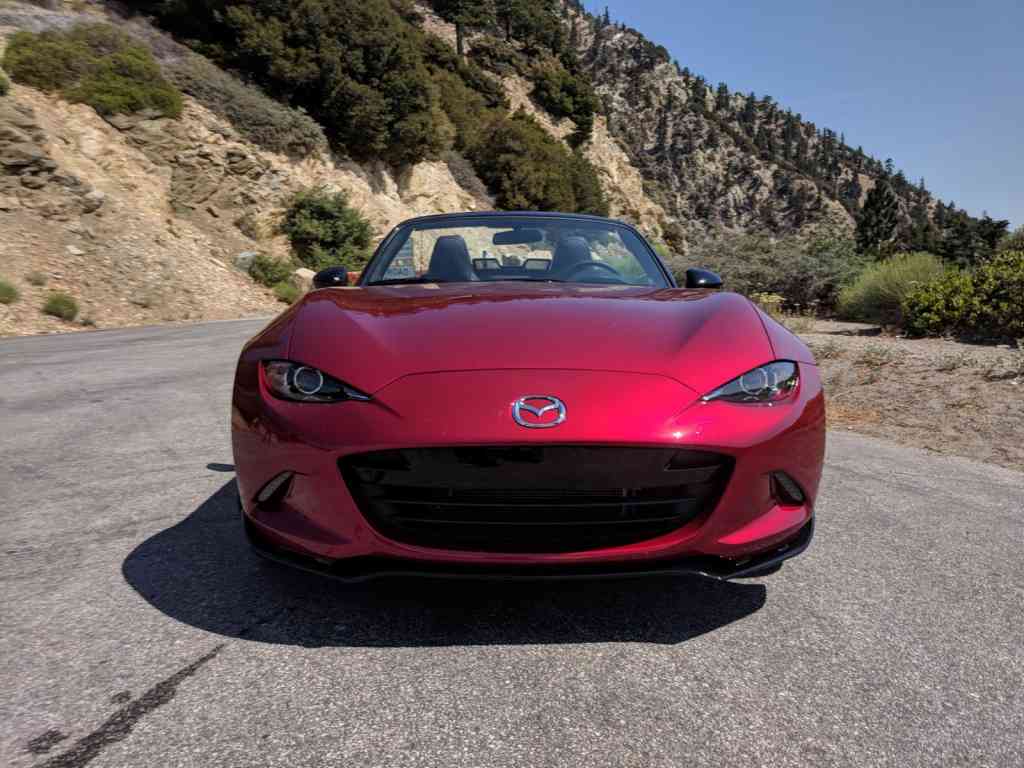 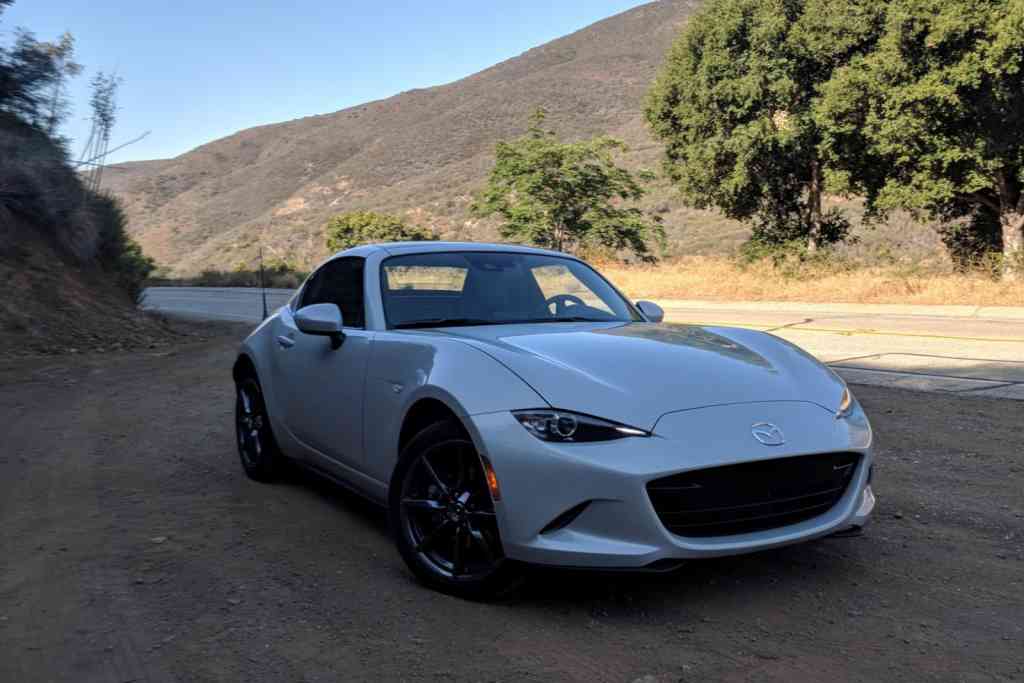 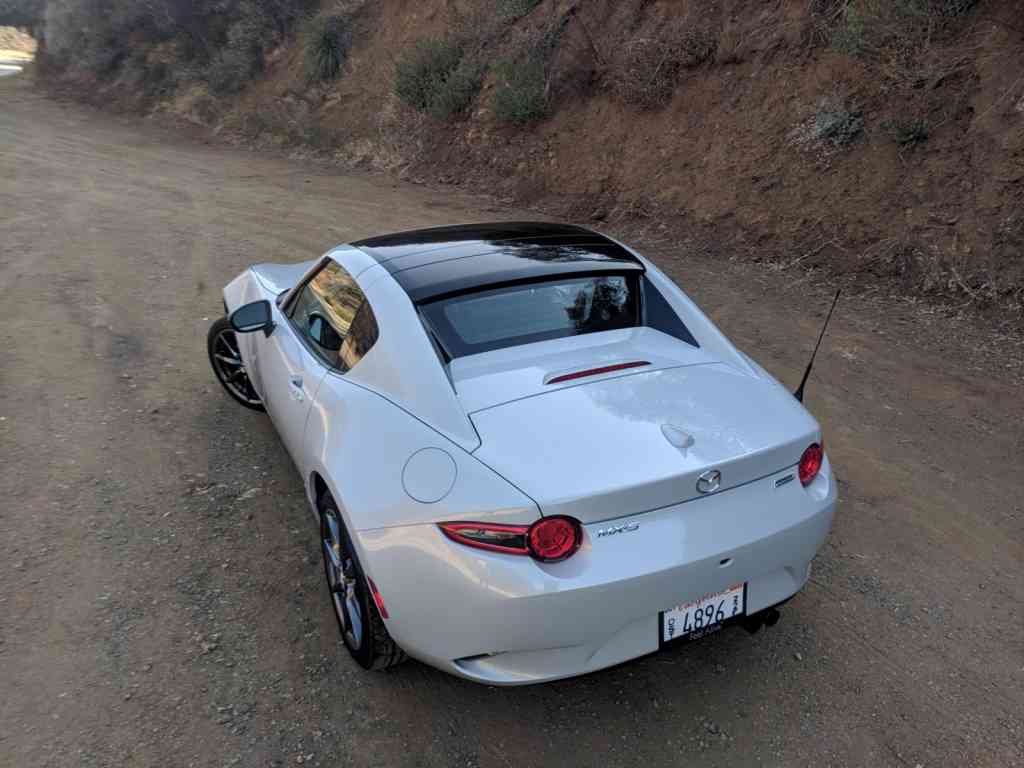 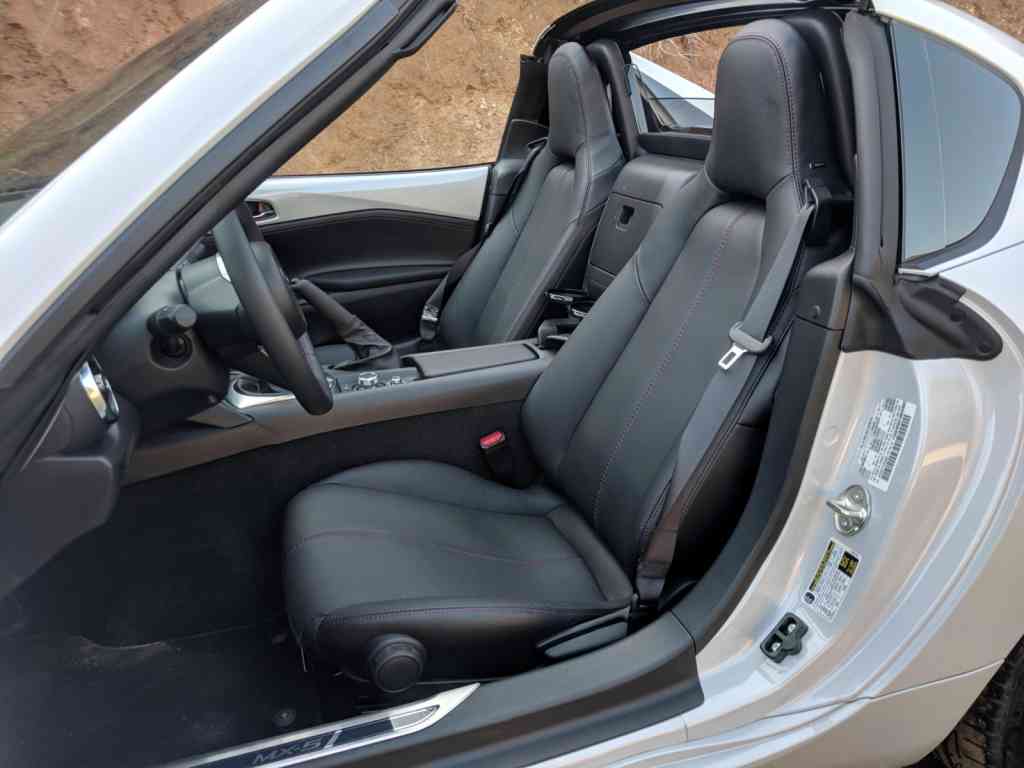 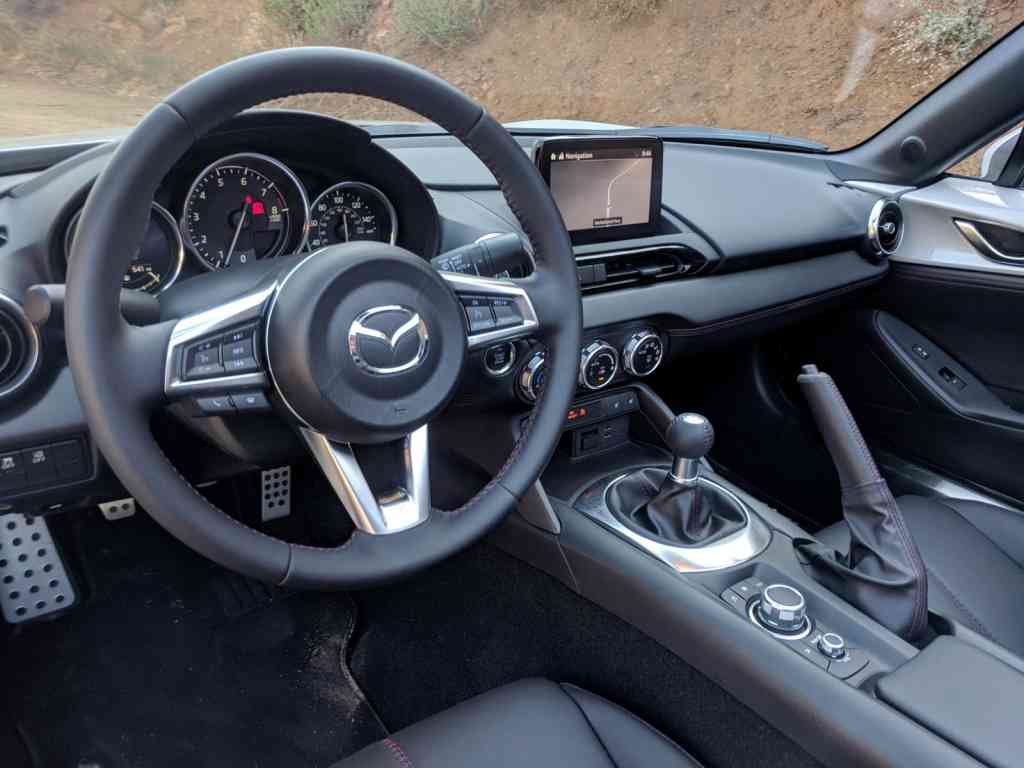 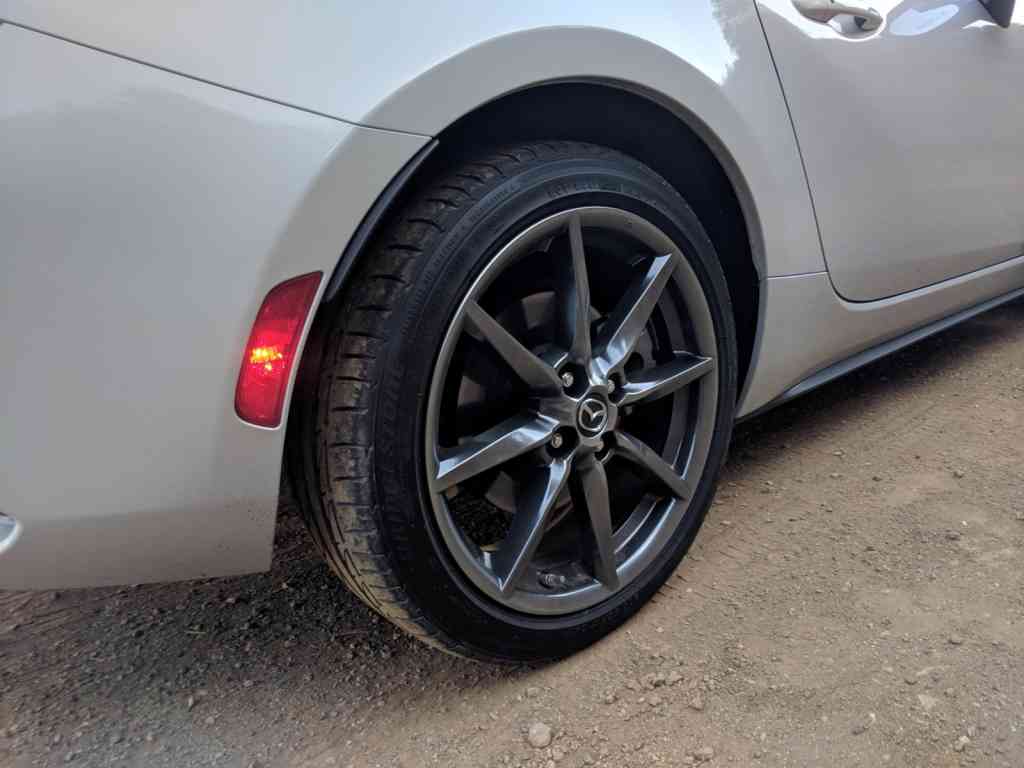 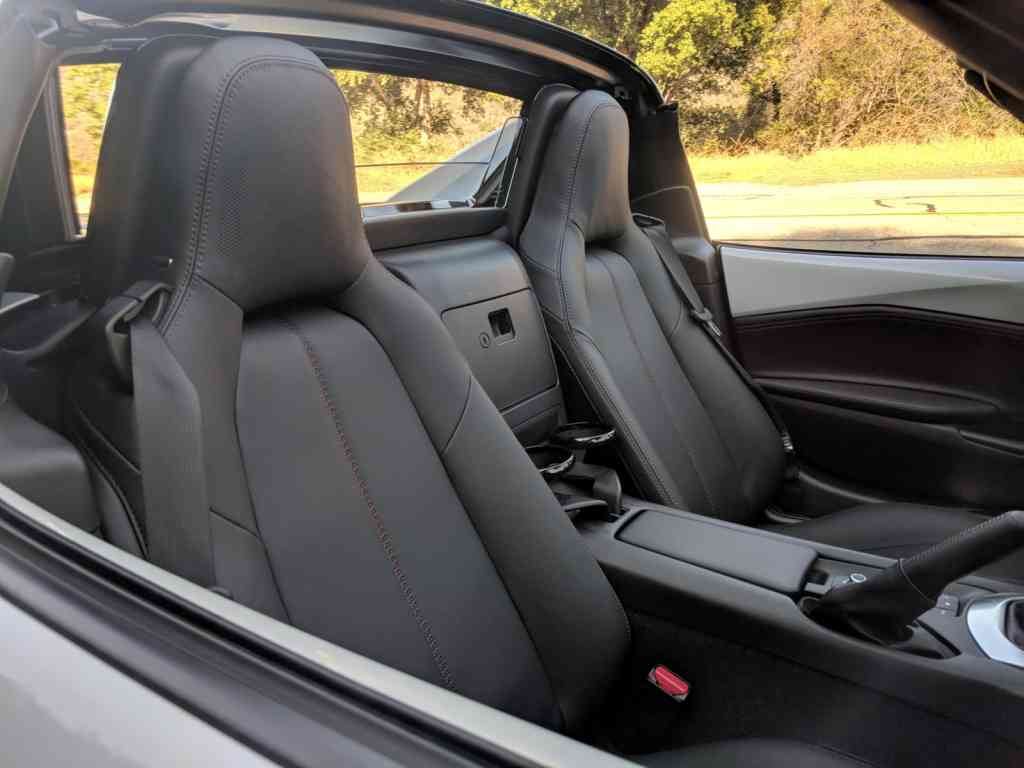 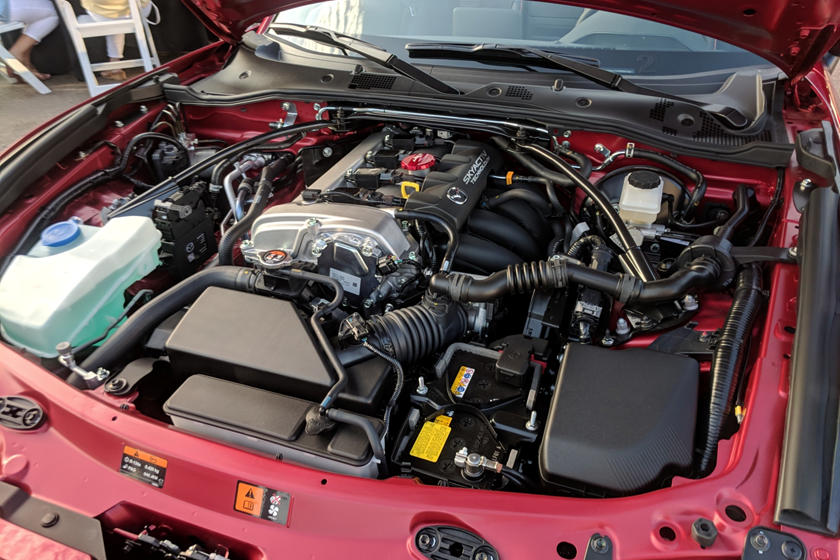 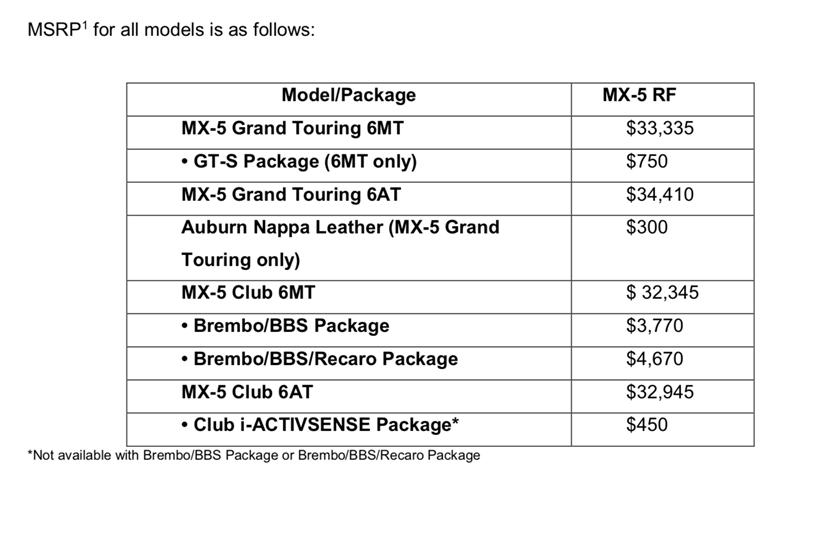 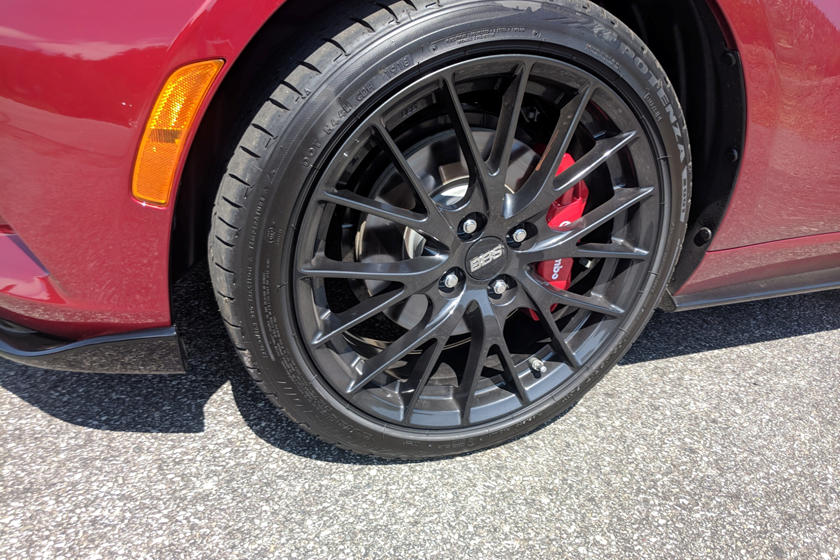 On the first day of the trip, I made a beeline for a soft top Club trim with the optional BBS wheels, Brembo brakes, and Recaro seats. I’ve reviewed the Club and Grand Touring trims in the past and found the Club to be my favorite. Little did I know, that opinion was about to change. On a track or on a blast through the beautiful Angeles Crest Highway, the soft top Club trim is still the one you want.

The drive up from San Diego to Los Angeles was filled with rough stretches of highway, and the Club trim was a tad bouncy over these types of roads. The Recaro seats were a bit tight without feeling uncomfortable for several hours of driving, though the base seats are more forgiving for long stretches. Once I reached the canyons it all became clear – for aggressive driving the Club is the trim to have.

Immediately, the Bilstein shocks made their presence known as I whipped the car through the Angeles Forest’s many twists and turns. The Miata has never been the most hardcore sports car on the planet but was instead engineered so that drivers of all skill levels could enjoy it. The tires do start to protest when you reach remarkably high speeds, but it is easy to let the car settle through a corner. The suspension, despite being a bit firm on rough roads, still has plenty of give and exhibits a bit of body roll through the bends.

Body roll has long been a trait of the Miata, which can easily be fixed on the aftermarket. Some hardcore enthusiasts may ask for a stiffer suspension, but Mazda is more interested in building a sports car that will cater to everyone. Just pick a line through the corner, let the suspension set, and enjoy what’s to come. Once the suspension leans in, it’s easy to modulate the throttle through the corner and keep the car steady.

The new engine has drastically changed how the Miata feels. Unfortunately, it still isn’t a powerhouse, so don’t expect some revolutionary boost in speed – this is still a Miata after all. The car’s six-speed manual was originally set up for the 1.5-liter engine (which we don’t get in the US), and this tweaked 2.0-liter, 181 hp unit more closely resembles the characteristics of that engine, creating better synergy between the two. Second gear now tops out at 62 mph (as recorded by testing equipment), meaning that the 0-60 time on this car should be much improved over last year’s model.

It also means that autocross enthusiasts, who were previously reaching the limits of second gear, will now have more to work with. Speaking of autocross, the throttle is now a lot easier to modulate and doesn’t cause such a jerky response from the engine. I took my 2018 test car to an autocross and noticed that the throttle did upset the car through some corners. This new throttle tuning is much smoother and should be welcomed in the autocross community.

My day in the soft top Club was extraordinarily fun but left me a bit tired from all of the noise and vibration. On the second day, I hopped in an RF Grand Touring with the new-for-2019 GT-S package. What a surprise, it quickly became my new favorite Miata. The last time I tested a Miata RF it was a Grand Touring with an automatic transmission, so the fun was kind of sapped out of it. The GT-S trim takes the luxury appointments of the Grand Touring trim and mixes them with the Bilstein shocks and limited-slip differential of the Club.

On the highway, the RF GT-S was in a different league in terms of ride comfort. Even though the suspension is the same, the GT-S felt far more compliant over California’s rough highways. This may have something to do with the suspension tuning on the RF, which further brings home the point that the RF is the one to buy if you have a long highway commute. I didn’t get to do much driving with the roof up because my driving partner simply couldn’t fit in the car with the roof up, but even with the roof down the RF is quieter on the highway because there is less wind circulating around the cabin.

The GT-S can be distinguished from a regular Grand Touring by a new black roof (on RF models) and yellow shocks. I was able to drive the RF on Mulholland Highway, one of California’s other best driving roads. Here the RF GT-S proved that it didn’t lose a step over the Club. The car felt just as planted and just as nimble. Even the base brakes didn’t miss a step, though I would guess that after several runs up and down Mulholland the Brembo brakes would fair better. The RF does gain around 120 pounds of weight, but it isn’t very noticeable. Mazda says the RF is still lighter than a soft top NC generation.

Mulholland also proved to be a more suitable road for the Miata because the turns were tighter and the speeds were lower. The only weak spot on the GT-S are the seats, which didn’t hold me in nearly as well as the Recaros in the Club. Mazda has made the Recaro seats available on the RF for 2019, but sadly not on the GT-S. If you are planning to go to the track or do autocross often, the Club is still your best bet. On this trip, the RF GT-S was the one I came away wanting most.

Though I already spoke about it earlier in the article, I couldn’t end without commending Mazda for what they’ve done with this reworked engine. The Miata was already one of the best-sounding four-cylinder cars on the market, but after a few tunnel blasts in this new car, it is clear Mazda has made it even better. The 2.0-liter SkyActiv sings all the way up to its ludicrous 7,500 rpm redline before you get to shift and enjoy the experience all over again.

I had to retrain my brain not to shift because in the redline it just seems absurd compared to other cars. There is one downside to the engine: it sounds terrible when you lug it at low rpm, but that just gives more incentive to drive it around everywhere at redline. The engine now feels Honda S2000-like, which is extremely high praise. To anyone who has been waiting to trade in their old S2000 for something that feels just as good, your long-awaited successor is finally here.

The Mazda MX-5 Miata was already one of the best sports cars on the market, but this 2019 update has put it above and beyond what a sports car can and should be. No car since the AP2 Honda S2000 has delivered such a visceral experience that could still make your spine tingle and still deliver stellar fuel economy. The typical Miata issues are still here, however. It’s not the fastest car out there. The cabin is still tight over long trips, and clearly, it isn’t the ideal car to take to Home Depot. The Miata may be flawed as an everyday car, but as a sports car, it’s practically impossible to match it on price or fun. 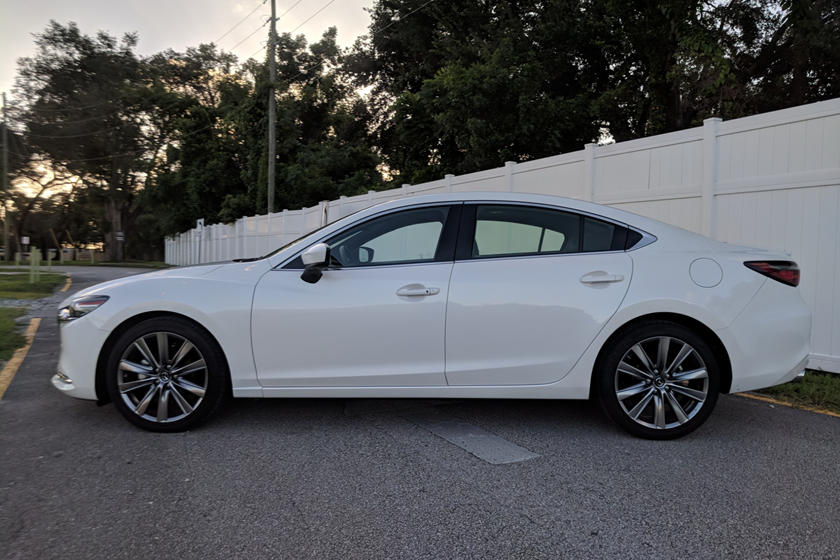 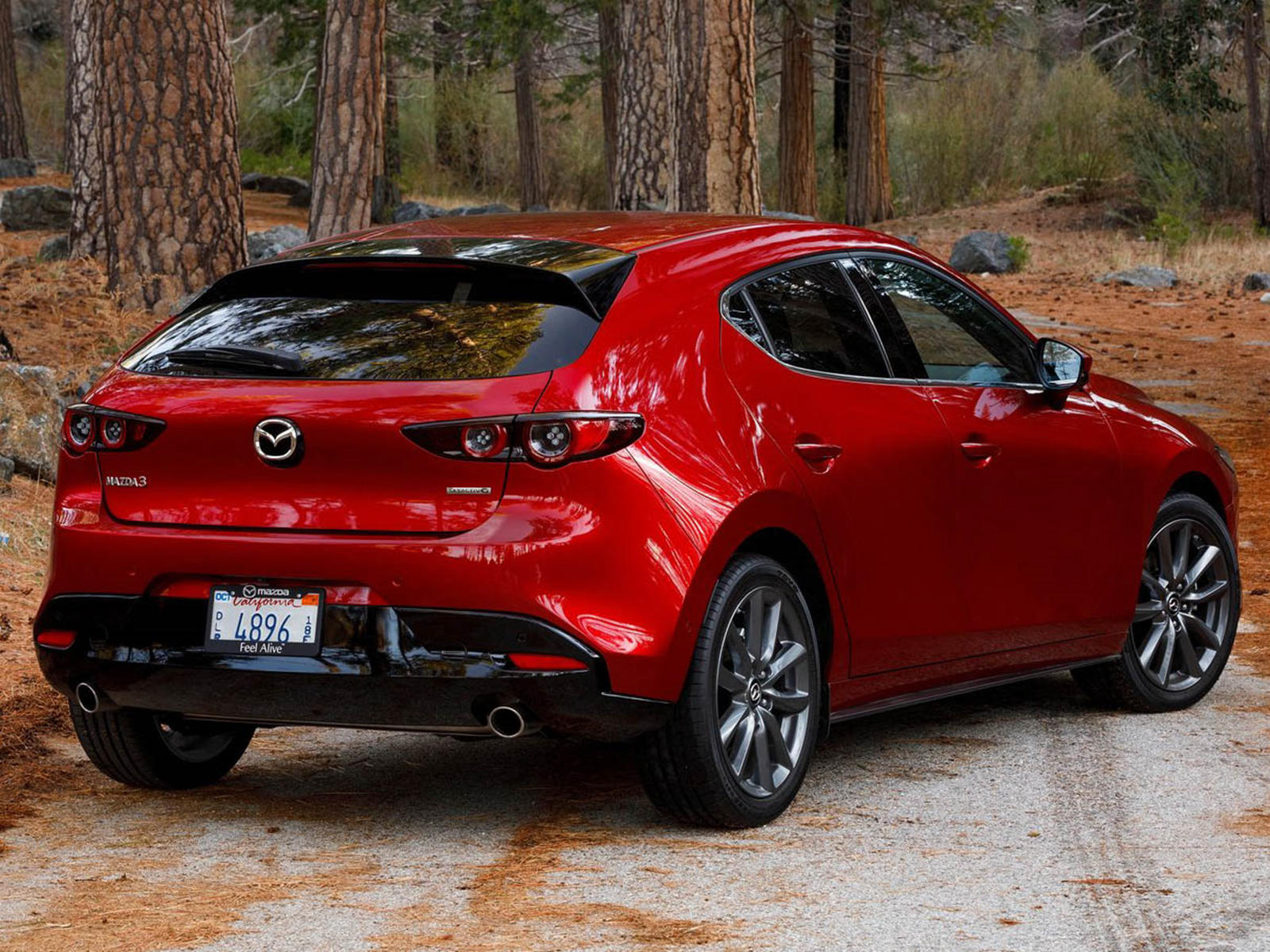 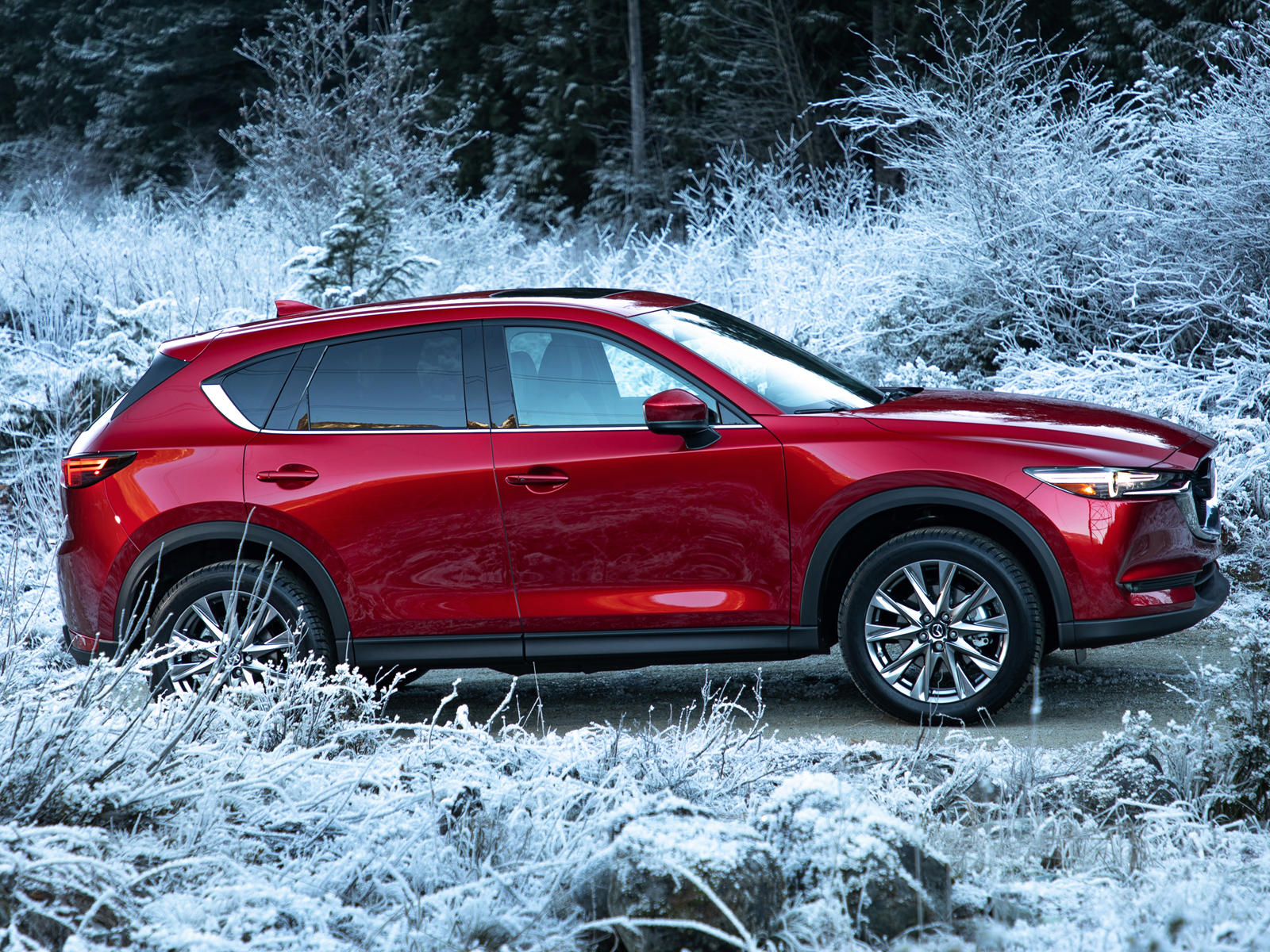 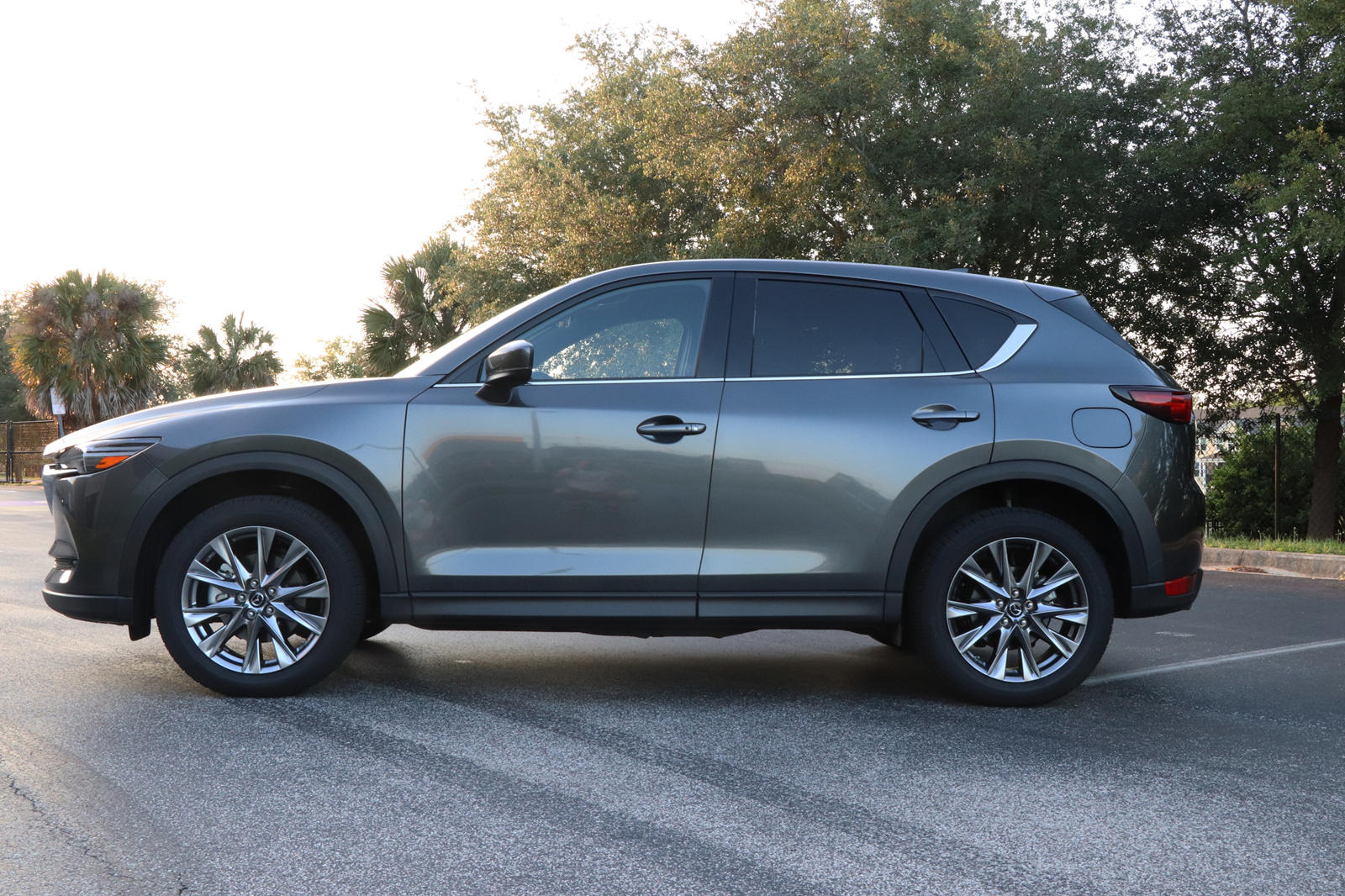 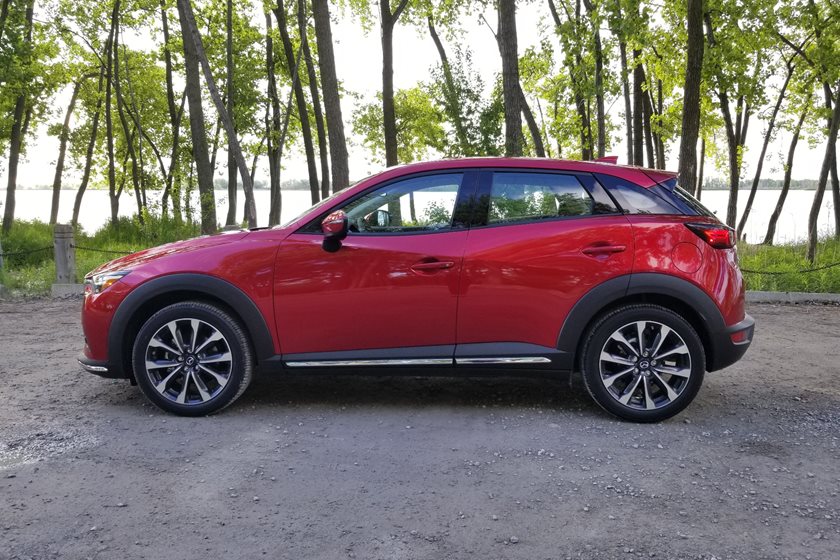