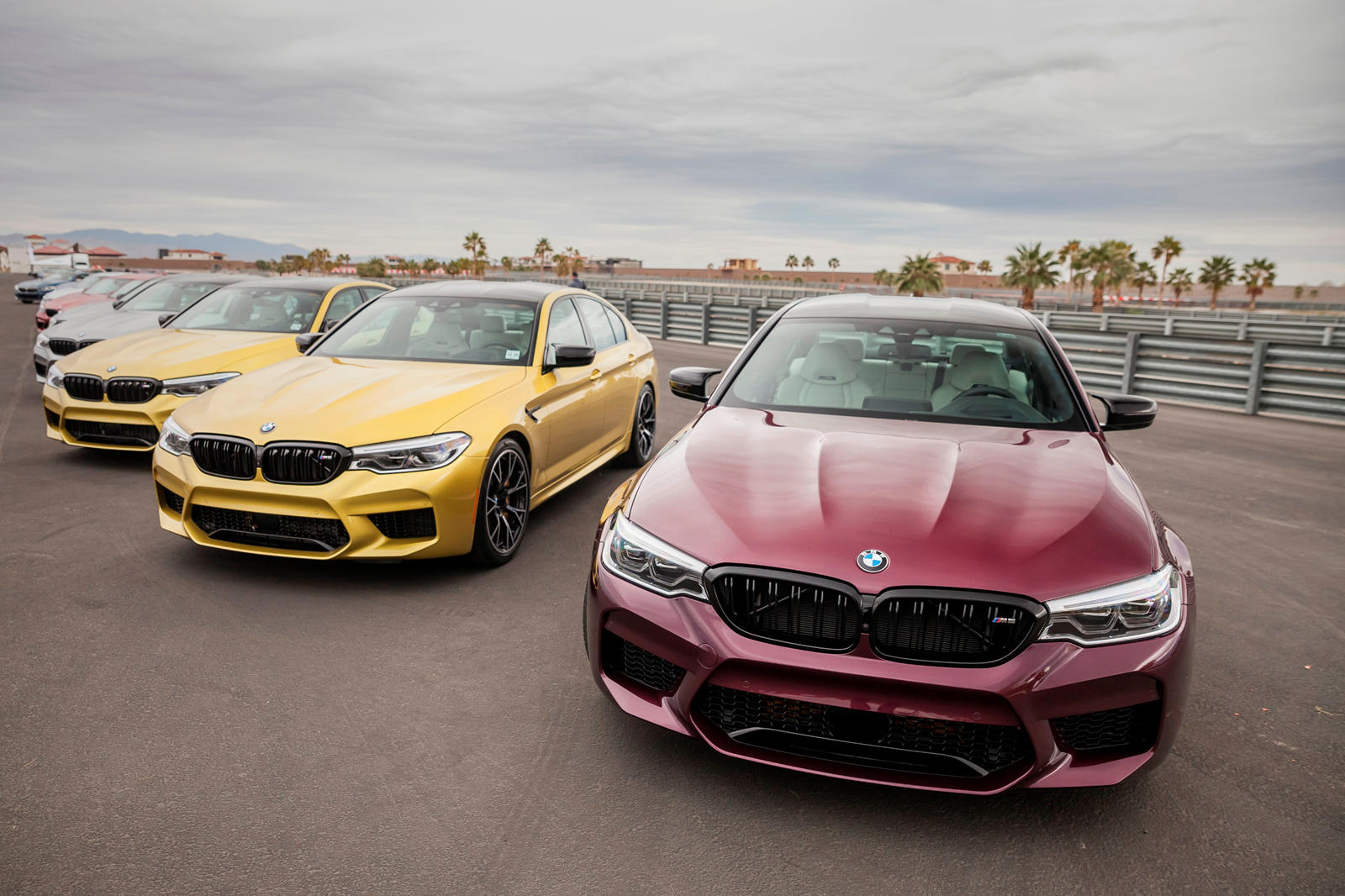 Including some from Rolls-Royce and Mini.

Imagine sitting at a racetrack, as company representatives feed you, answer your questions, and hand you the keys to any BMW, Mini, or Rolls-Royce car you fancy driving. This is TestFest in a nutshell. We were invited out to Thermal Raceway in Palm Springs, California to drive an assortment of cars from the BMW Group on the track, on an autocross circuit, out on the road, and through a specially devised off-road course.

We’ve already posted our full reviews of some of the other vehicles we drove, including the BMW Z4 and M850i xDrive Coupe, so be sure to check those out as well. Here, we wanted to offer our quick takes on the BMW M2 Competition, M5 Competition, X2 M35i, i8 Roadster, and M4 CS, and Mini Cooper JCW Knights Edition and Classic Cooper. We will also have a full review coming on the Rolls-Royce Cullinan.

The BMW M2 Competition replaces the standard M2 for the 2019 model year, now powered by a 3.0-liter twin-turbo inline-six borrowed from the M3. It has been detuned to produce 405 horsepower and 406 lb-ft of torque but in this smaller chassis, it feels anything but hampered. 0-60 mph takes 4.2 seconds with the six-speed manual or just 4.0 seconds with the seven-speed DCT.

We hopped in a manual car and we would gladly trade two-tenths of a second from the 0-60 time for the pleasure of rowing this wonderful manual. The steering is the best we felt all day and can change weights depending on drive mode. It may not have the best interior of the BMW range but with a starting price of $58,900, it is the M car we’d most want to put on our driveway.

Whereas the M2 Competition completely exceeded our expectations, we came away slightly disappointed by the M5 Competition. The car’s performance metrics are impossible to argue with – a 4.4-liter twin-turbo V8 producing 617 hp and 553 lb-ft of torque going out to xDrive through an eight-speed automatic. 0-60 mph takes around three seconds and if you prefer the feel of a rear-wheel-drive car, BMW even lets you shut off the xDrive system.

The M5 is more comfortable on the road than the Mercedes E63 AMG but we much prefer the interior of the E-Class and the insane cracks from its AMG-tuned exhaust. We drove the M5 on the track, where it was perfectly capable but felt massive compared to the other cars we tested. If you only plan to drive the M5 on the road, we say just go for the lesser M550i, which offers plenty of power on its own. With a starting price of $110,995, we’d gladly save money on a “normal” 5 Series. 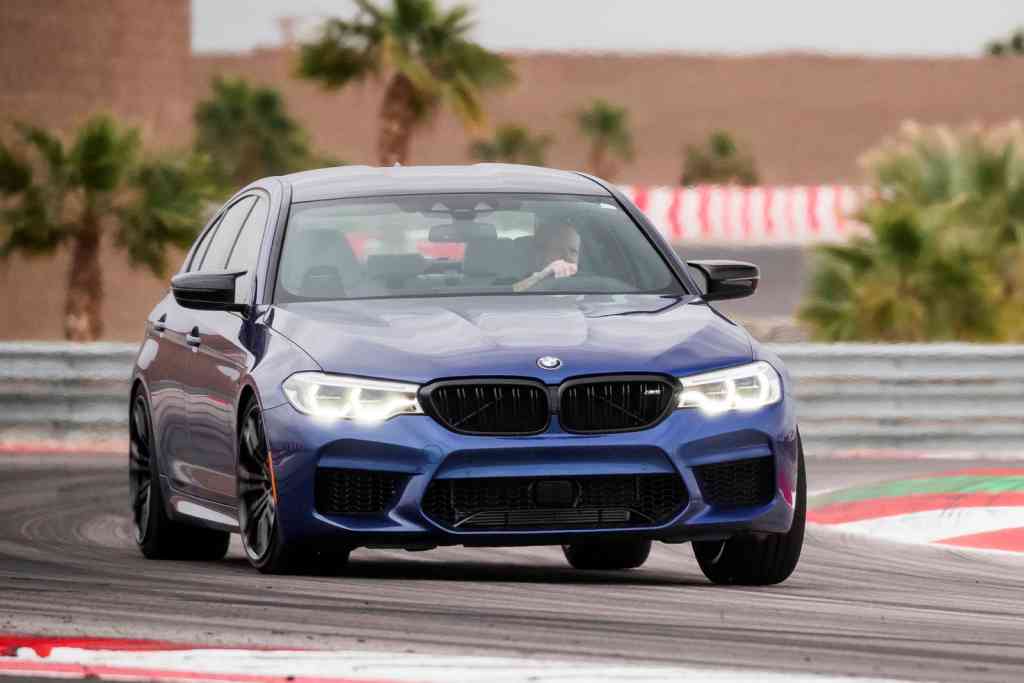 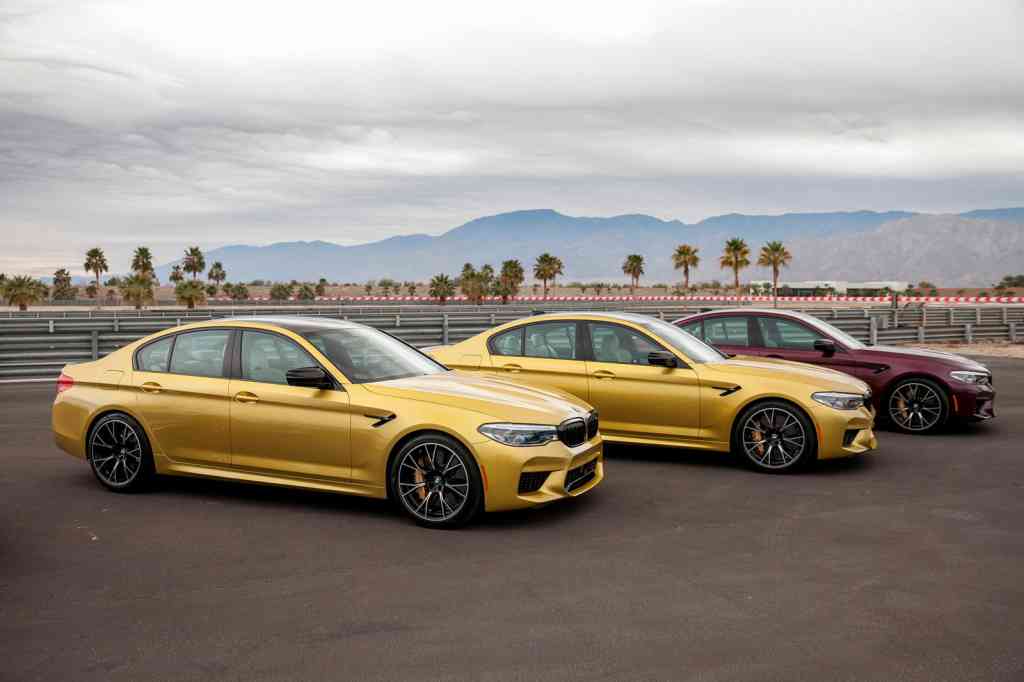 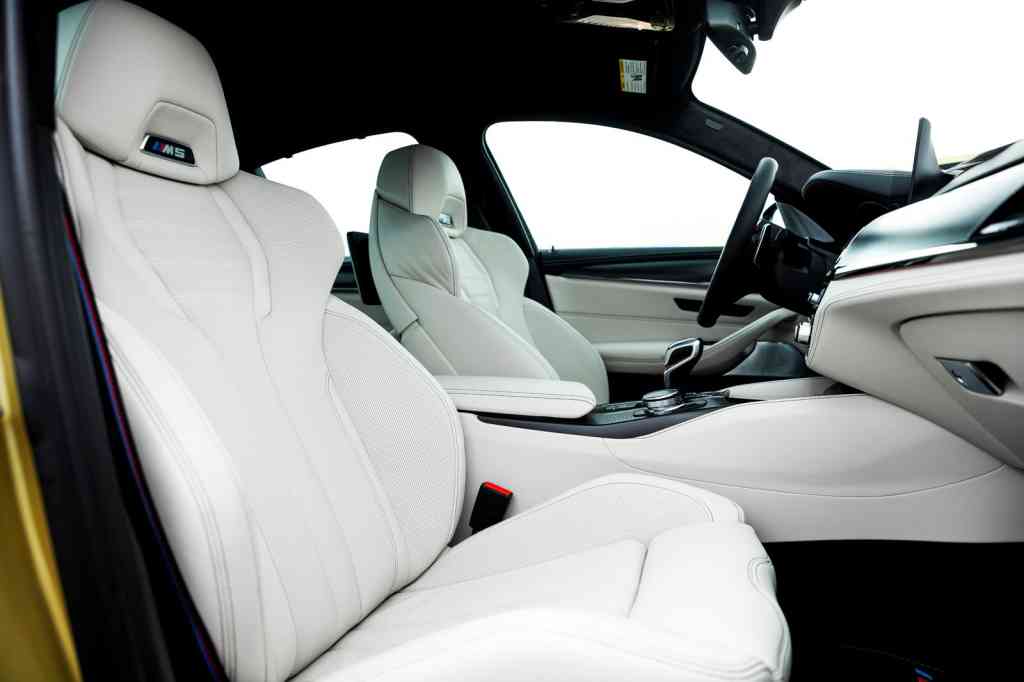 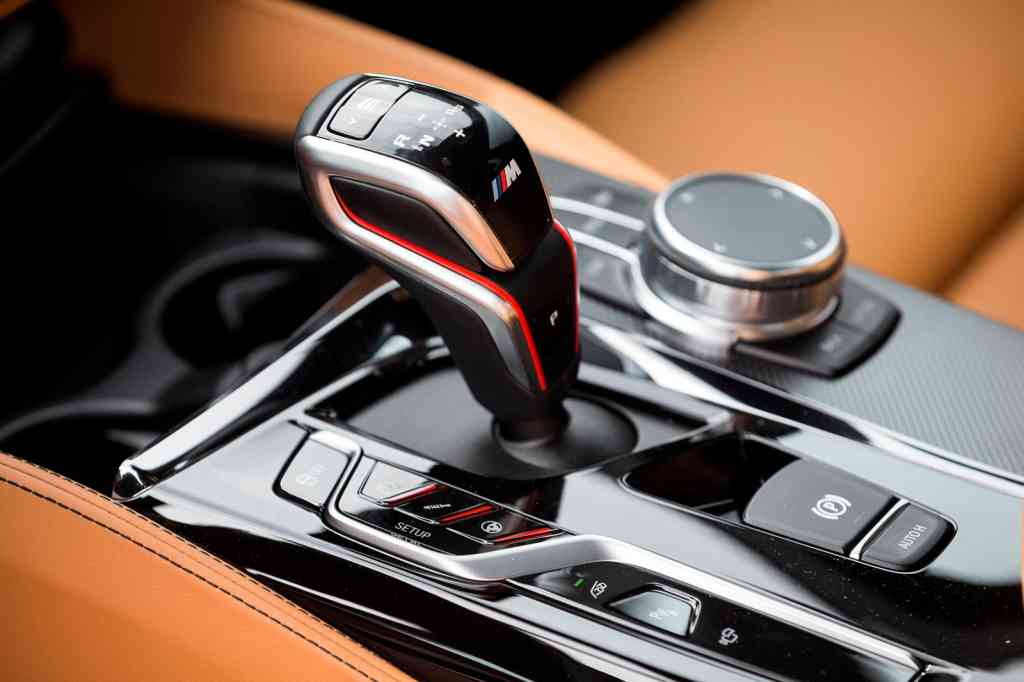 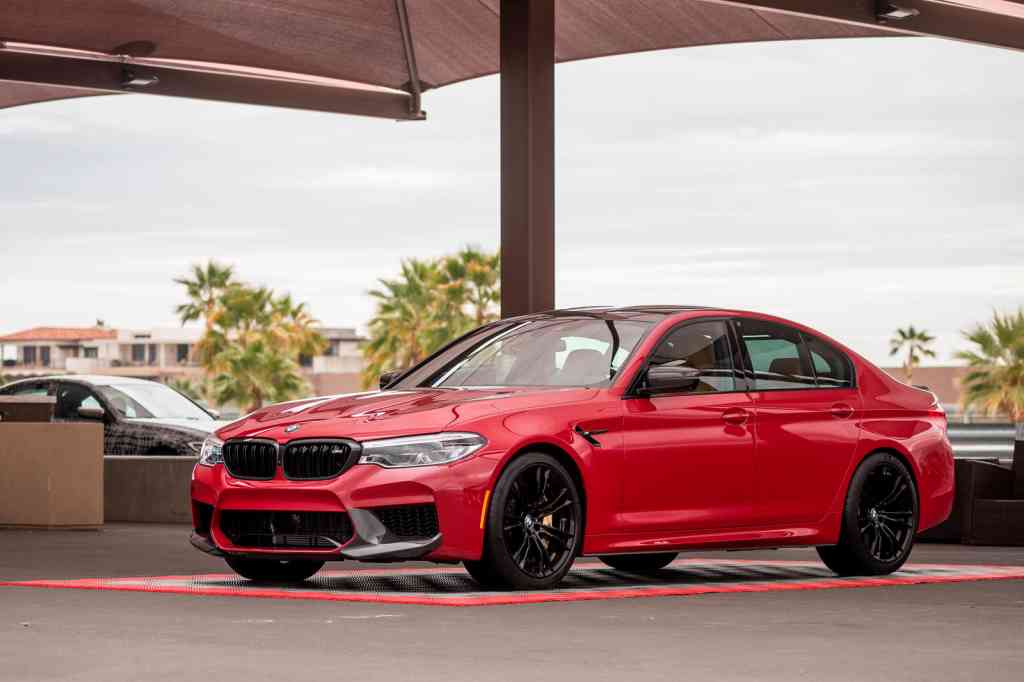 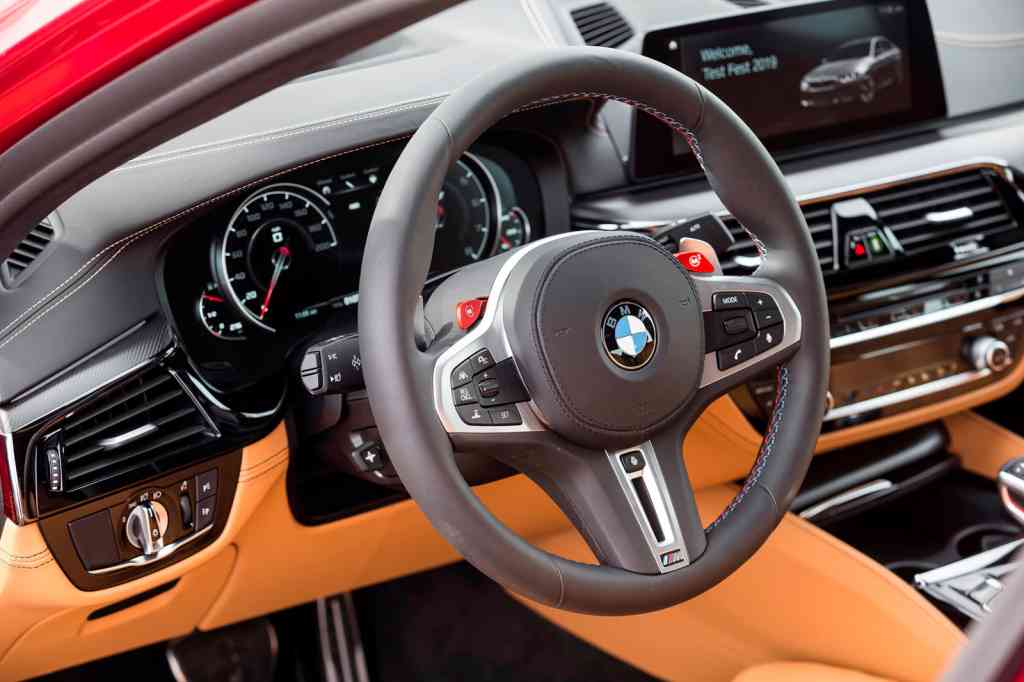 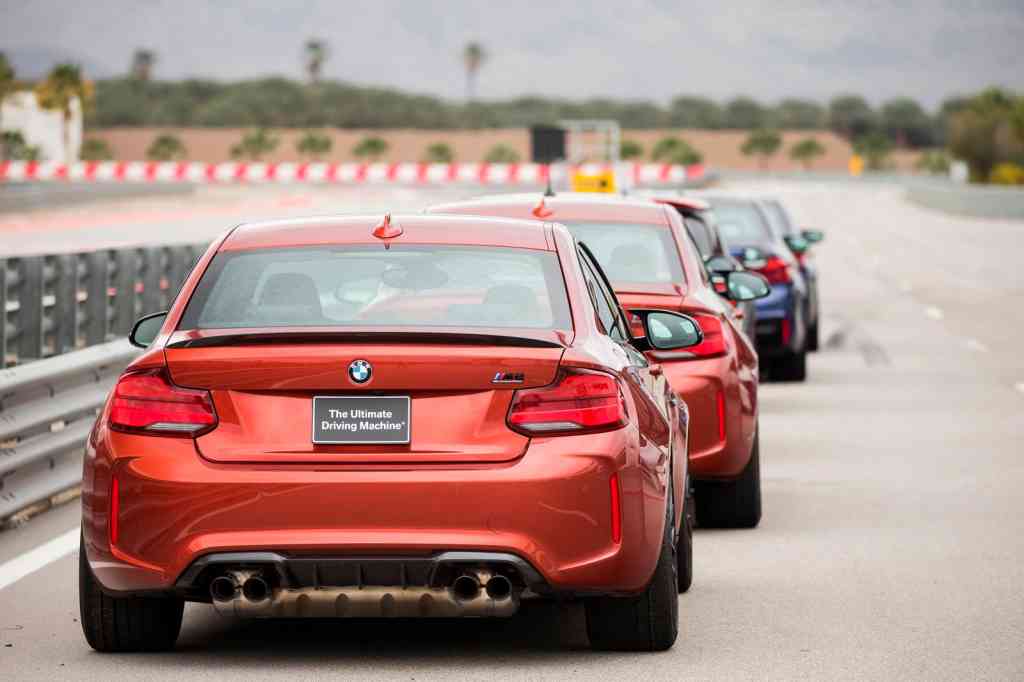 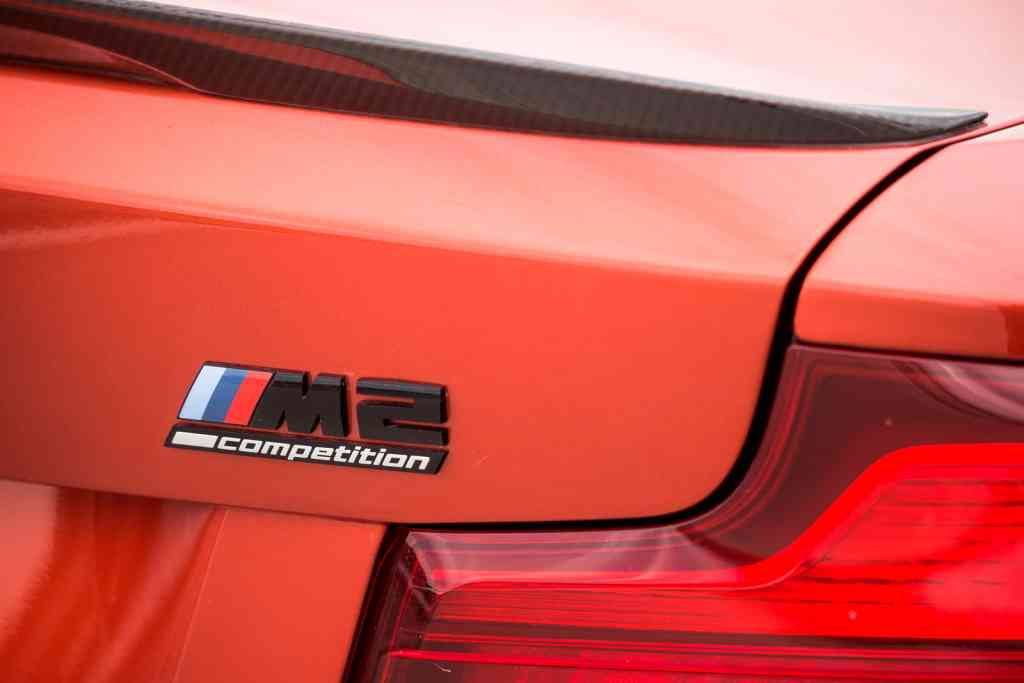 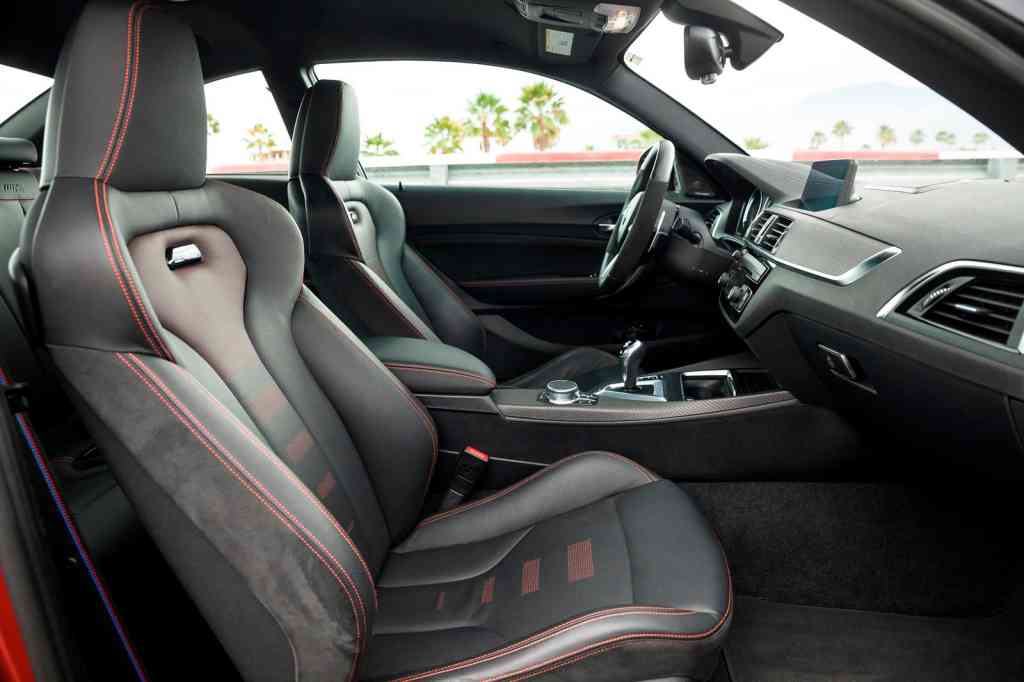 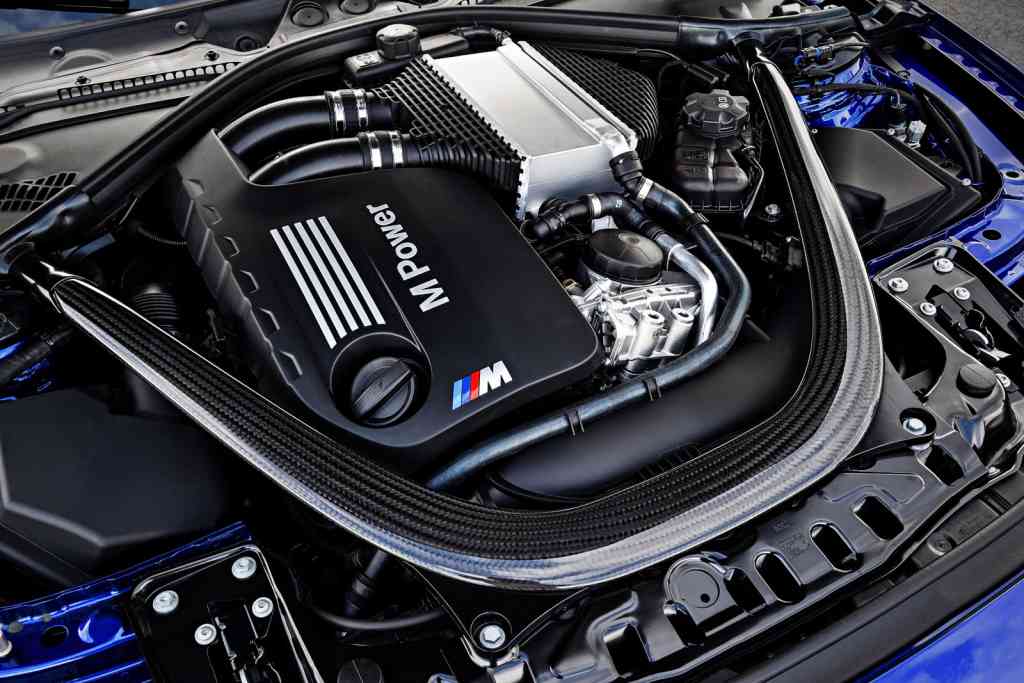 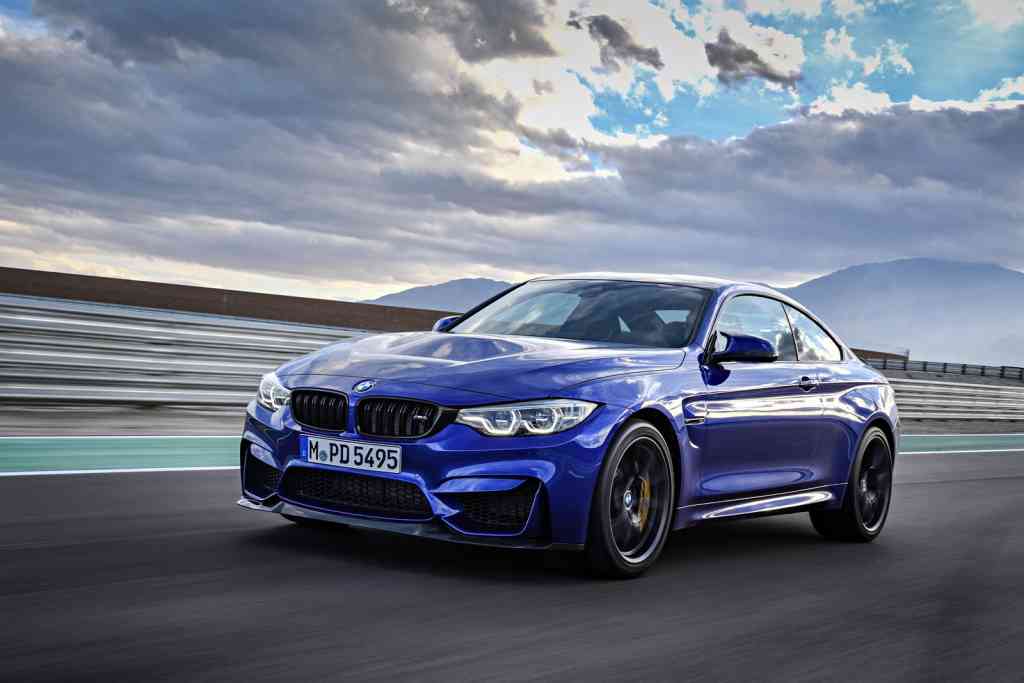 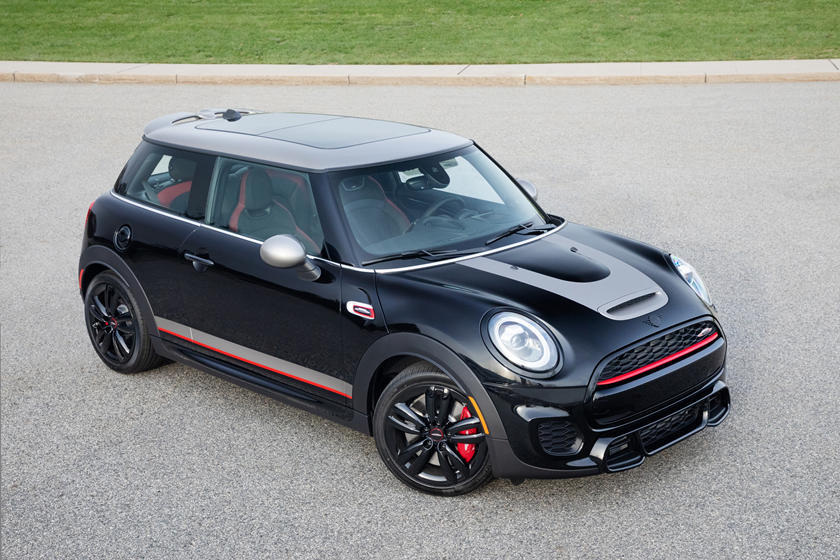 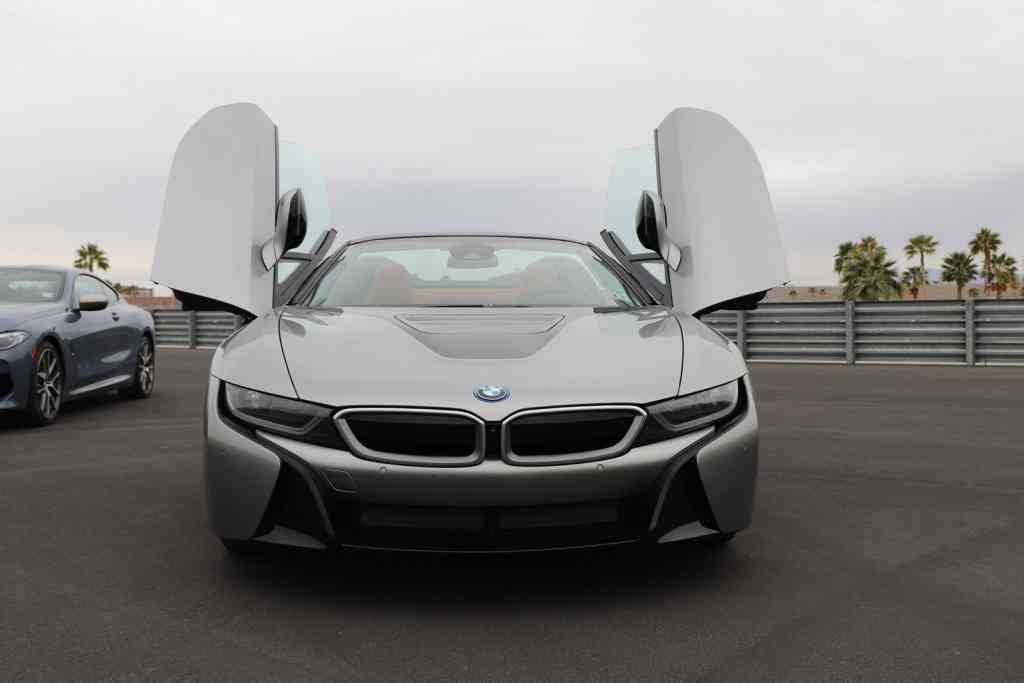 We didn’t have much time behind the wheel of the i8 Roadster but we did get just enough seat time to discover what this car is all about. The i8 roadster is one of BMW’s most expensive cars at $163,000 but it has one of the most outdated interiors – old gauges, old shifter, old iDrive system. The 1.5-liter turbocharged three-cylinder (from a Mini Cooper) produces just 228 hp and 236 lb-ft of torque but combines with an electric motor to produce a total of 349 hp resulting in a 0-60 mph time of 4.4 seconds.

Even with the electric motors giving it a boost, the i8 doesn’t feel particularly quick and would be easily outclassed by the similarly-priced Acura NSX. The i8 makes some cool sounds via altered engine noise through the speakers, which you may enjoy more than we did. As it sits, we feel the i8 is a better showpiece than a driver’s car.

The current generation BMW M4 (known as the F82) has never been our favorite. We much preferred the V8-powered E92 M3 Coupe. With a new M3 and M4 just around the corner, BMW has decided to give the current cars a limited edition sendoff in the form of hardcore CS models. This M4 CS starts at $103,100 and includes a tuned twin-turbo inline-six producing 454 hp and 442 lb-ft of torque going out through a seven-speed DCT (no manual is available on the CS). BMW also equipped the car with specially tuned stability control, anti-lock brakes, adaptive M suspension, M differential, and M Servotronic steering.

This all amounts to the best M4 we’ve ever sampled. Around the track, we were impressed with the insane amount of mechanical grip, which only faltered when we were a bit careless with the throttle. The interior has been stripped out with only the bare essentials left behind, making the M4 CS feel like a true track day special.

When we tested the BMW X2 in its xDrive28i trim, we noted how it almost felt like a BMW hot hatchback but lacked the requisite power. BMW took care of our complaints with the new X2 M35i, which now packs 302 hp and 332 lb-ft of torque from a 2.0-liter turbocharged four-cylinder. 0-60 mph now takes just 4.9 seconds down from 6.6, using xDrive AWD and a well-tuned eight-speed automatic.

BMW insisted we take the X2 on the track, where it fared better than we expected for a sub-compact hatchback. Understeer was present but could be controlled with careful timing of the throttle. We still wish BMW had given us more feedback in the steering, which has been a weak point for the X2. With a starting price of $46,450, the M35i is less expensive than the last heavily-optioned xDrive28i we reviewed.

After hopping in and out of BMW’s best models, we wanted to get acquainted with some of the special edition Mini models on the autocross. We grabbed a John Cooper Works Knights Edition because it had a six-speed manual transmission and the blacked out exterior looked cool. The peppy 2.0-liter turbo mill produces 228 hp and 236 lb-ft of torque, which felt was more than enough in such a small vehicle. We loved the snappy feel of the manual shifter and how the driver is treated to a bit of gearbox whine at low speeds, replicating the sound of an original Mini.

The $42,000 as-tested price may be a lot to swallow for some people but once you take a ride in one of the John Cooper Works models, we think you’ll begin to understand why it’s worth the price. No other car of this size feels as premium inside and few feel as enjoyable to drive.

Our day concluded rather unexpectedly with a test drive of a classic Mini Cooper from 1999. Mini brought out an assortment of classic models, including the green right-hand-drive model that we drove on the grounds of the race track. The tiny 1.3-liter engine only puts out around 60 hp, meaning you can basically go foot-to-the-floor any time you like. Steering is completely manual, making the driver feel truly involved from behind the wheel, though we are happy we didn’t have to put up with it in modern California traffic.

Inside, the Classic Mini is anything but serene, thanks in part to a cramped cabin and insane amounts of noise from the drivetrain. And do you know what? We didn’t mind one bit! This Mini is one of the most hilarious cars we’ve ever driven and this brief test made us think long and hard about importing one from Europe. You may think you need a 650 hp Chevy Camaro but we promise you this 60-hp Mini is more fun. Don’t believe us? Try one for yourself. 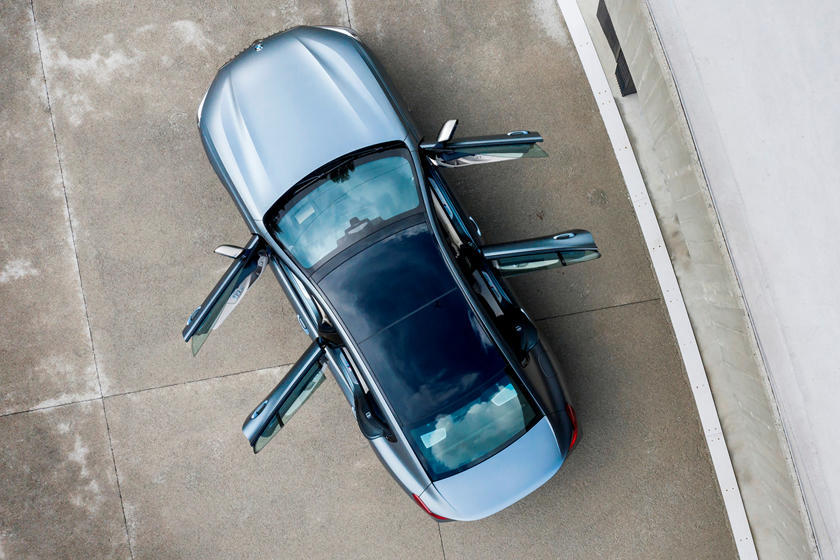 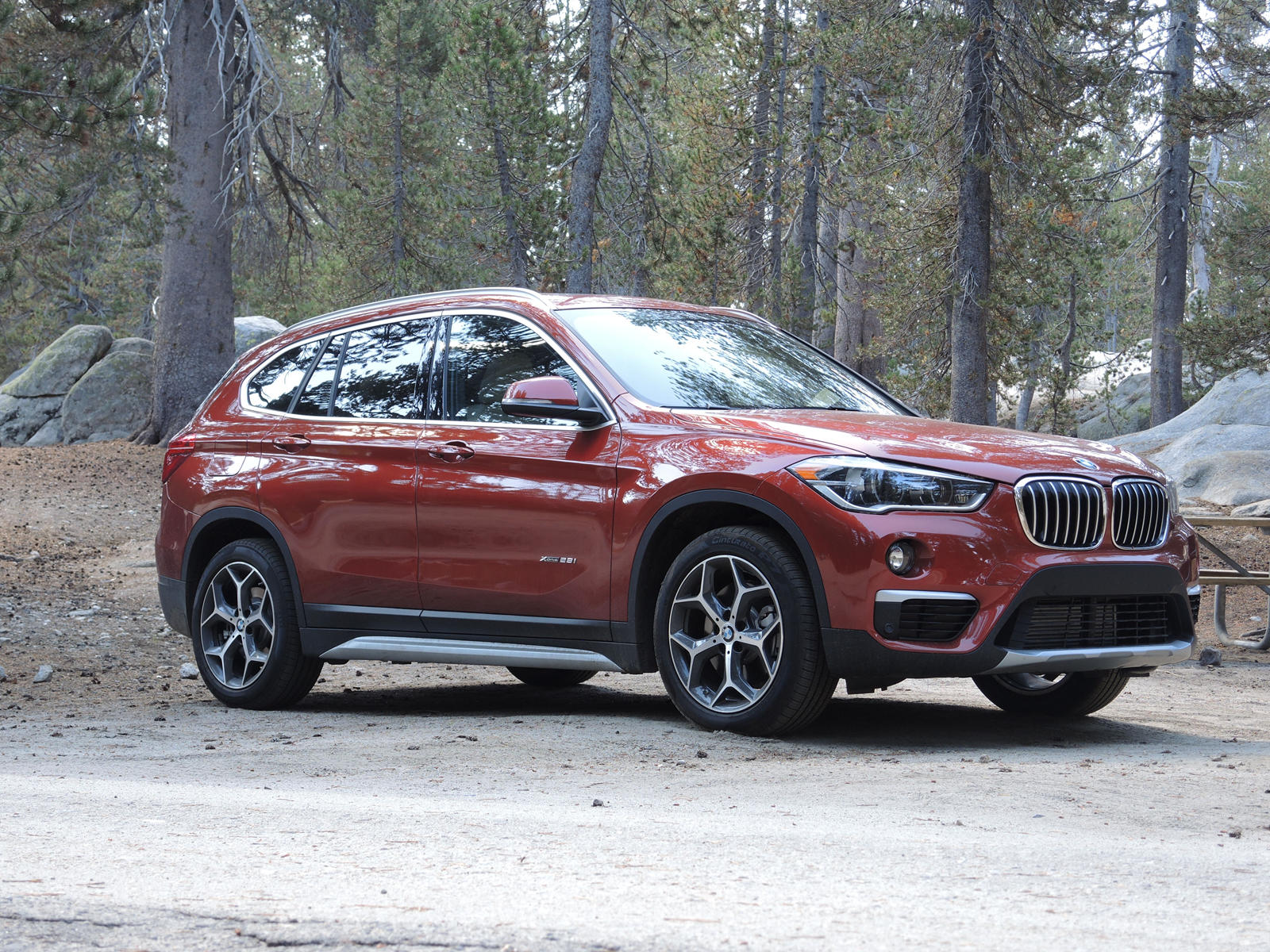 2018 BMW X1 Test Drive Review: This Is Probably The Perfect Car For You 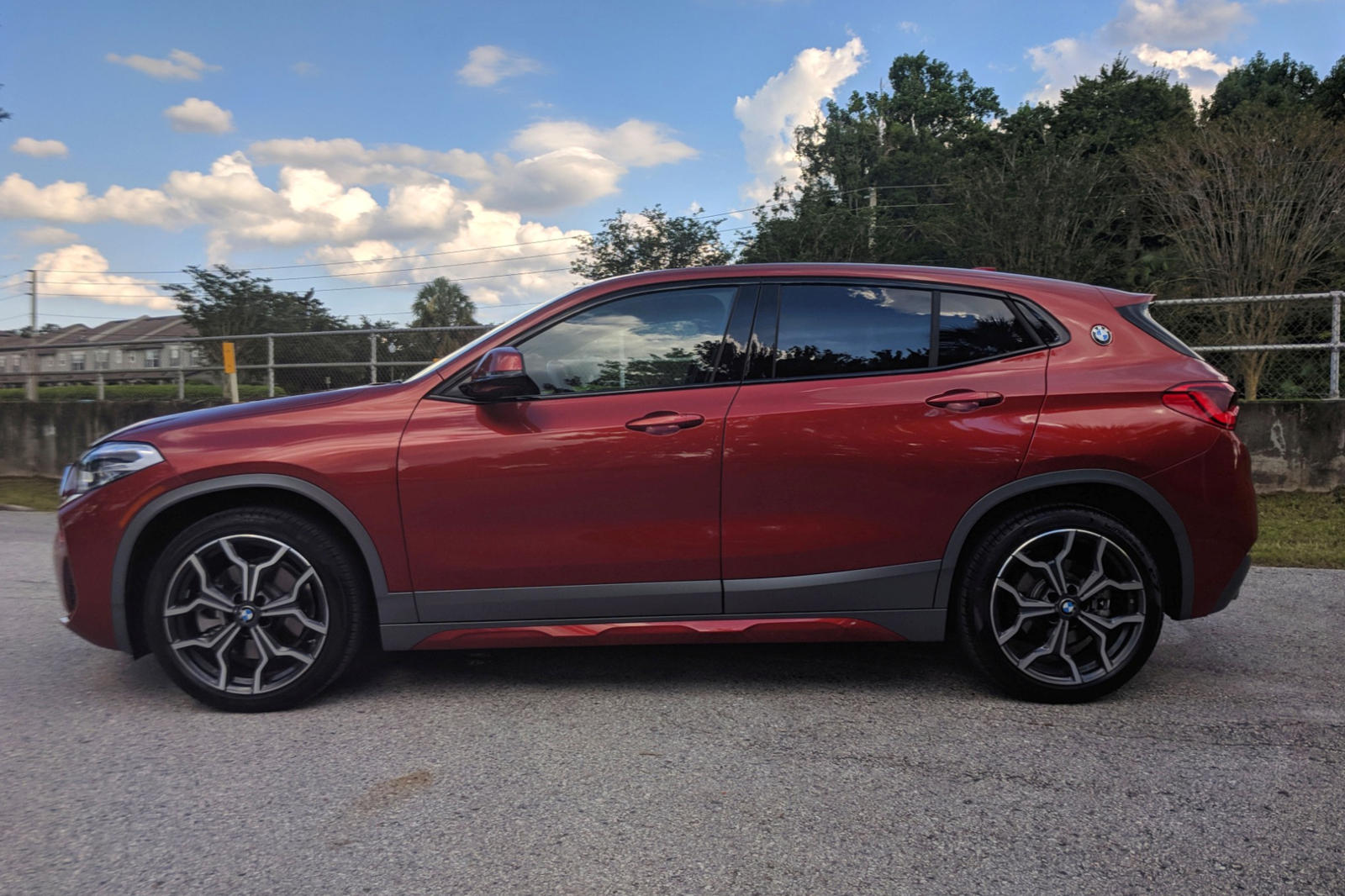 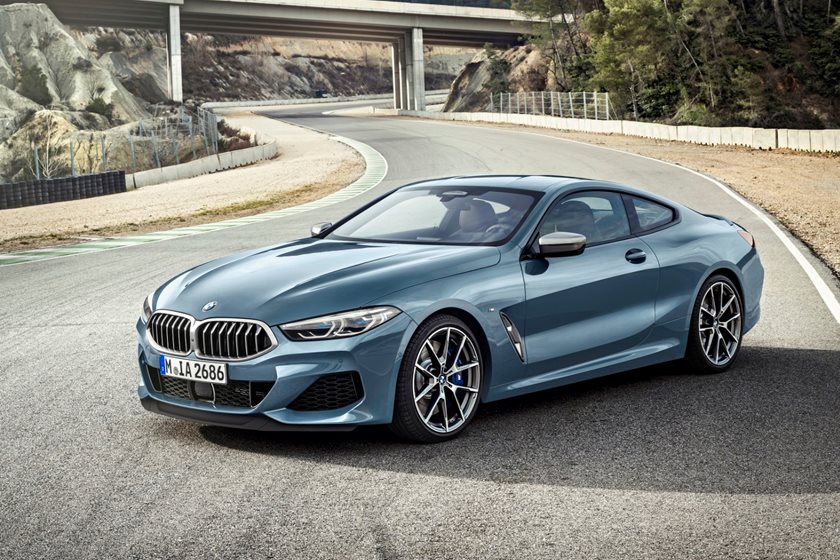 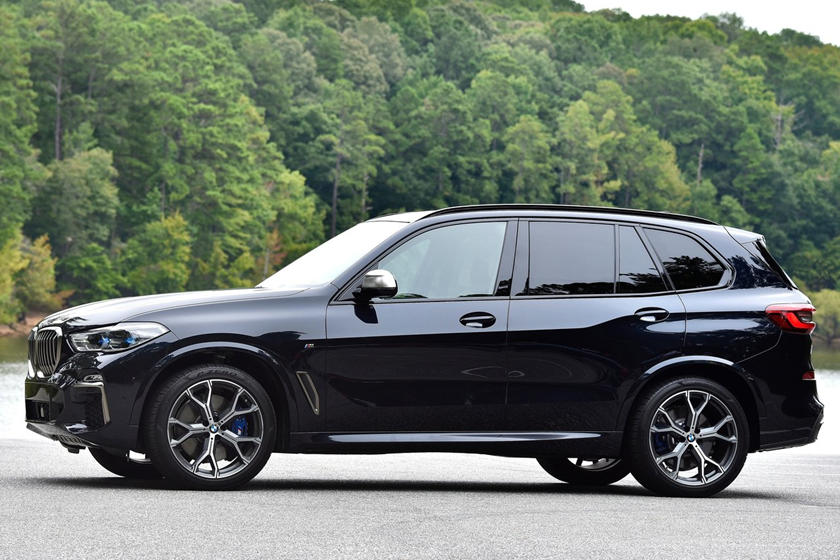