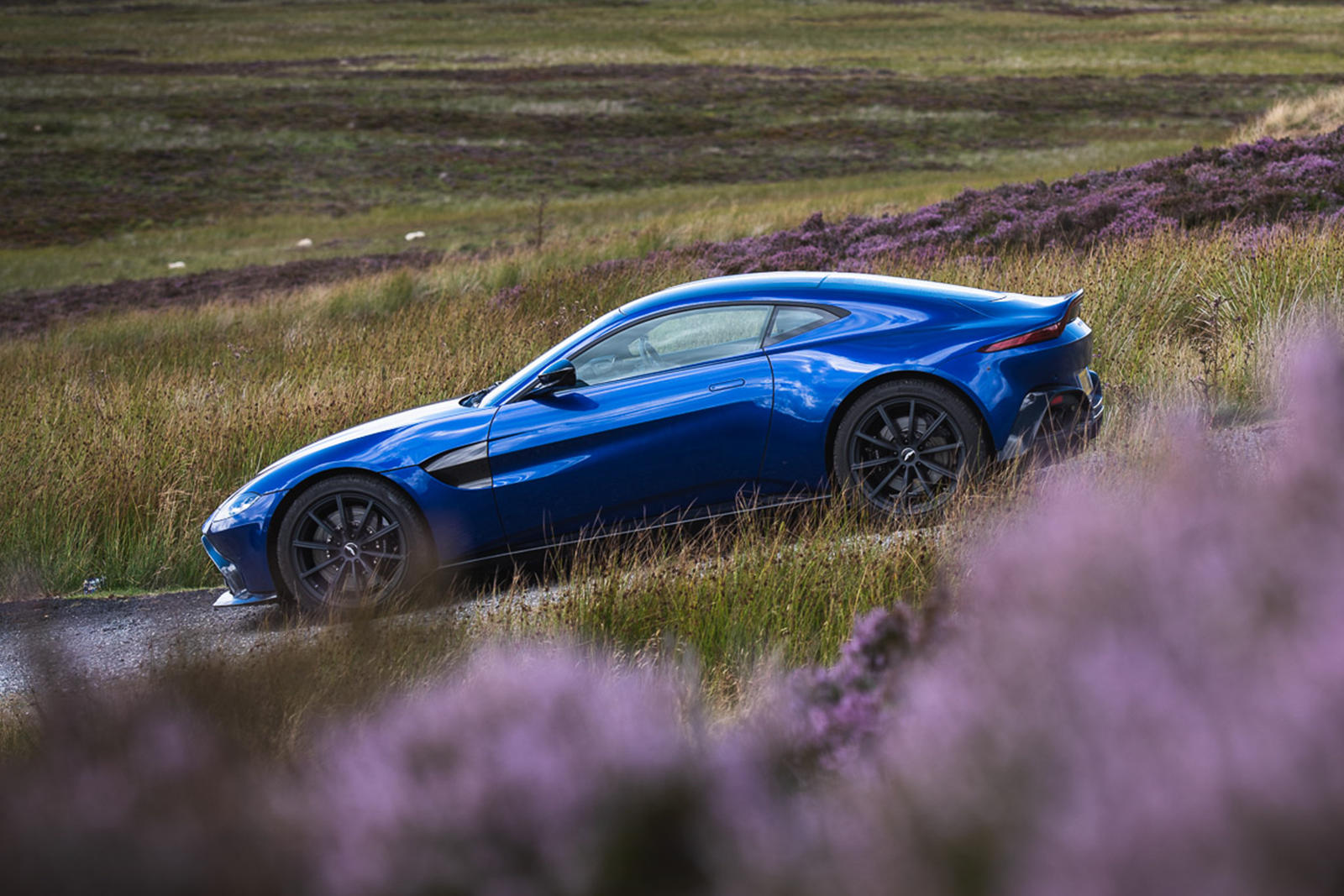 Beauty becomes the beast as Aston Martin enters a new age of turbocharged AMG engines and aggressive styling – we try the new Vantage for size.

Few cars can truly be described as timeless but the Aston Martin V8 Vantage has to be one of them. First seen as a concept in 2003, it went on sale in 2005 and still looks good 13 years on. Sure, it’s not perfect and the interior has never quite kept pace with the competition. But it remains a drop-dead gorgeous sports coupe and a hell of an act to follow for this new Vantage.

Aston Martin could have done a Porsche and lightly modernized the looks to keep the fans happy. Credit is therefore due for coming out fighting with a super-aggressive new look, all harsh angles, gaping vents and pumped-up bodywork. It’s a challenging looking car, recognizably Aston Martin yet also something different from what went before.

This bold new look is appropriate when you consider the big changes under the skin too. We’ve had our first taste of turbocharged Aston Martins with the V12 and V8 versions of the DB11. The Vantage continues the ‘second century’ evolution and shares much with its grown-up big brother, including the 503-hp, AMG-supplied 4.0-liter twin-turbo V8 and Mercedes electrical architecture. Aston Martin’s internal jargon refers to the DB11 as the ‘gentleman’ while the Vantage is the ‘hunter’, as expressed with a punchier set-up and character.

You’ll have your own feelings about the looks but in the metal the Vantage is a genuine head-turner. The wide, flat hood, slim headlights and gaping grille all accentuate its width and low-slung stance while the shallow window line, kicked up tail and prominent diffuser make it look ready to pounce. It certainly stands out when compared with the softer, more conservative German alternatives such as the Porsche 911 and Mercedes-AMG GT, the latter sharing the same 4.0-liter V8 engine of course. If the DB9 and previous Vantage had a whiff of old gent about them this new one is decisively aimed at a younger crowd for whom a Porsche or Mercedes are just a little too mature and sensible. 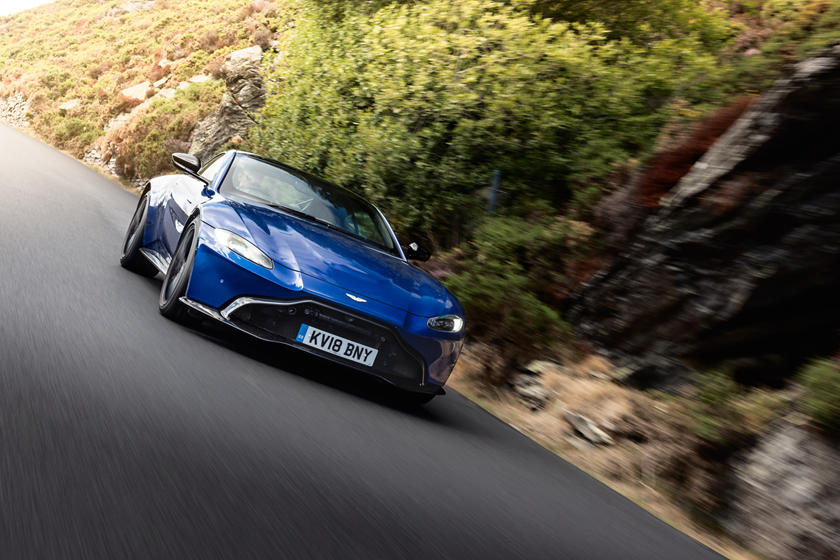 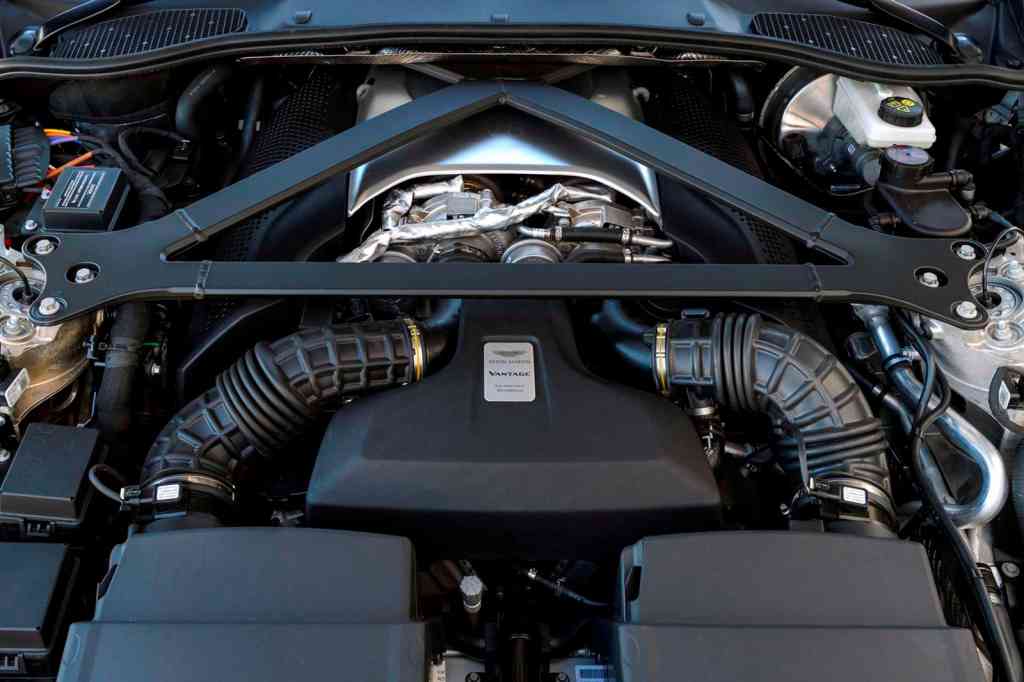 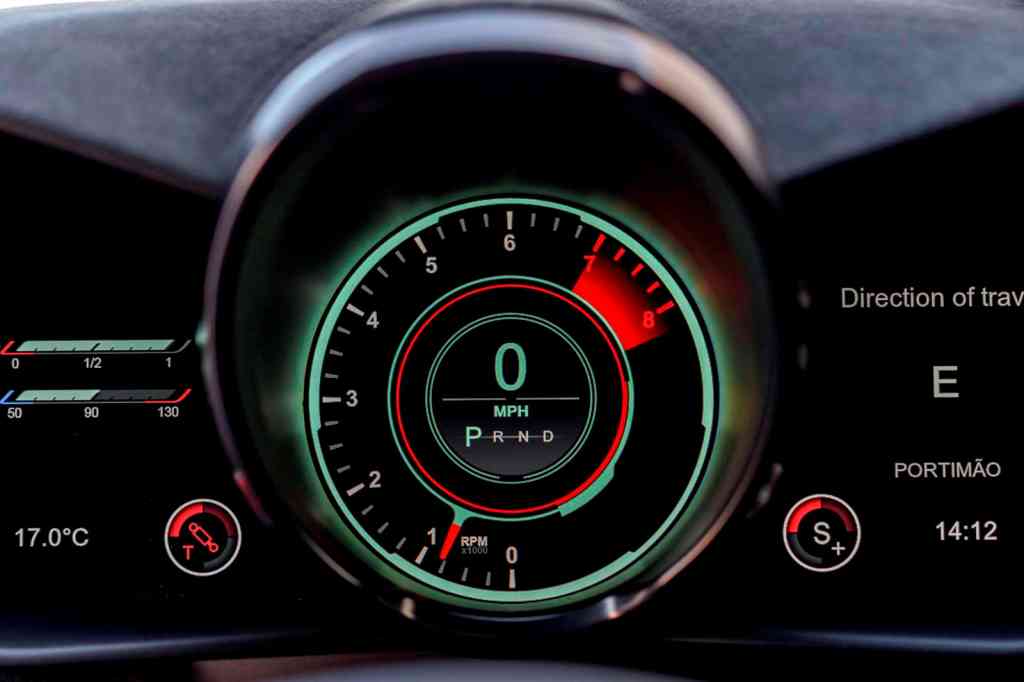 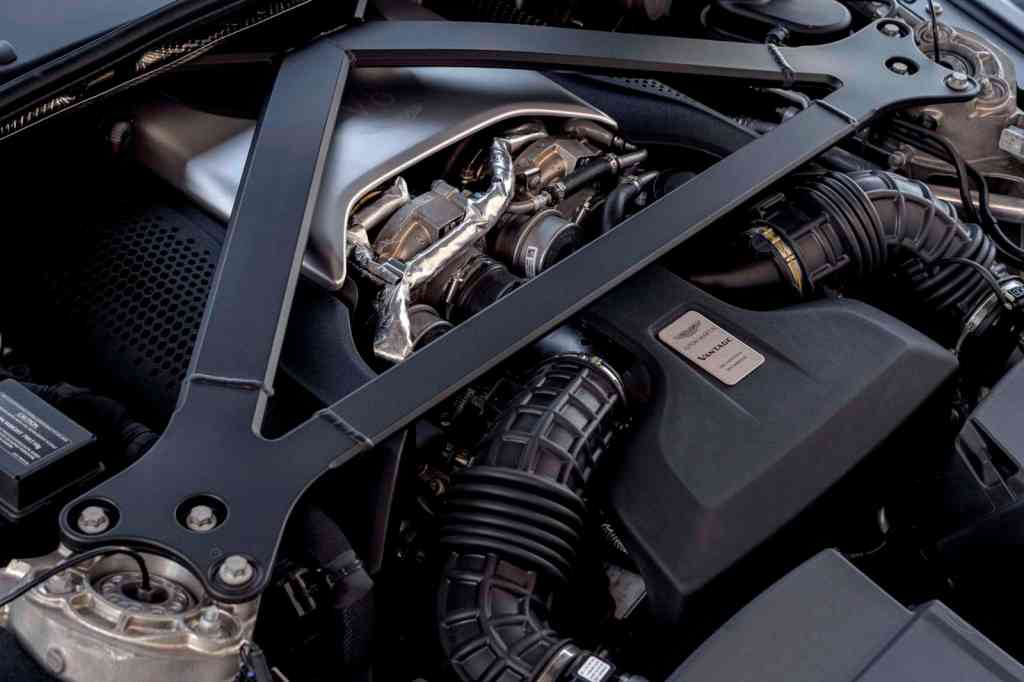 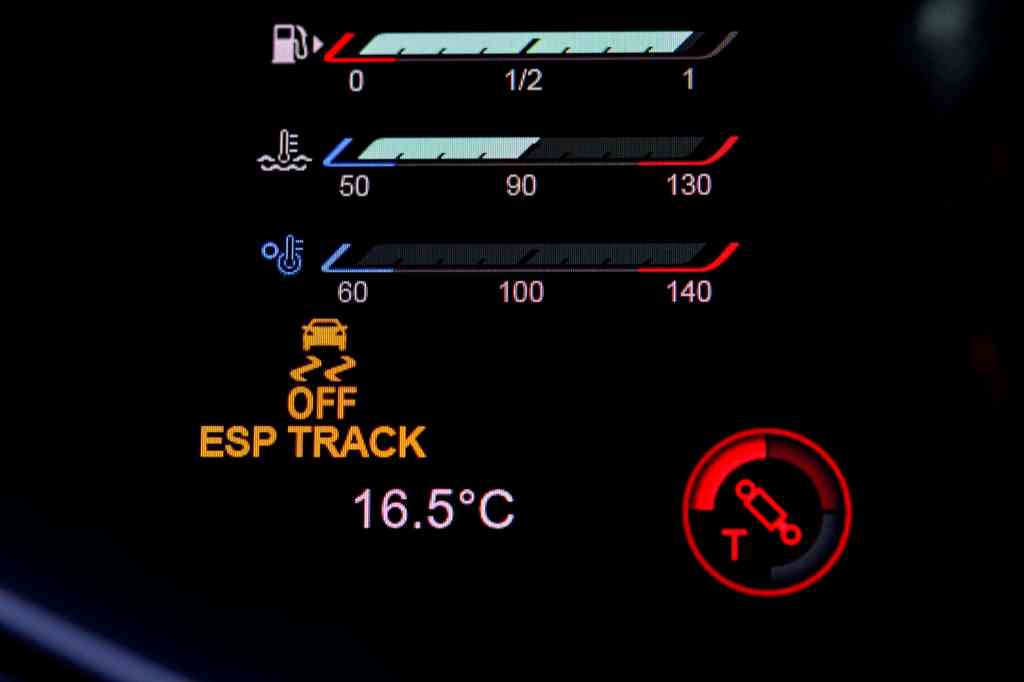 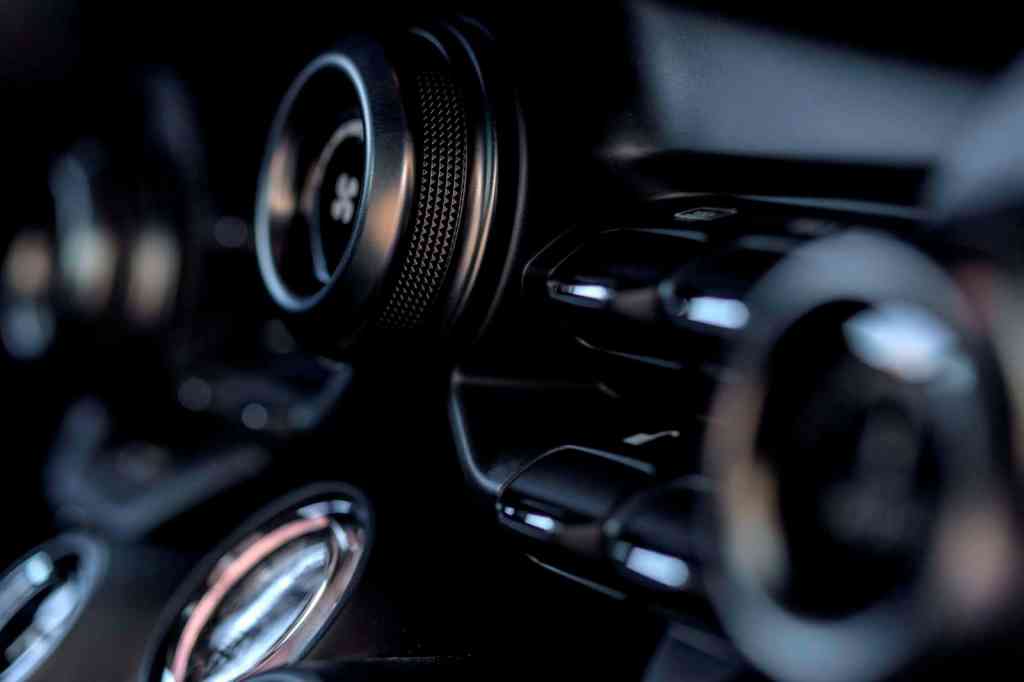 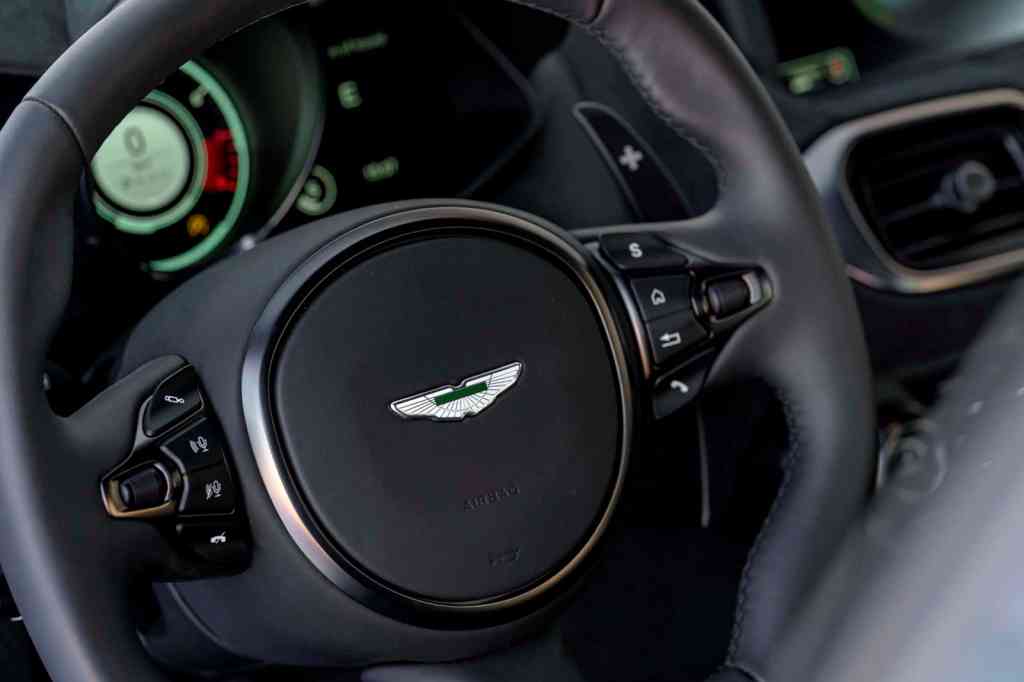 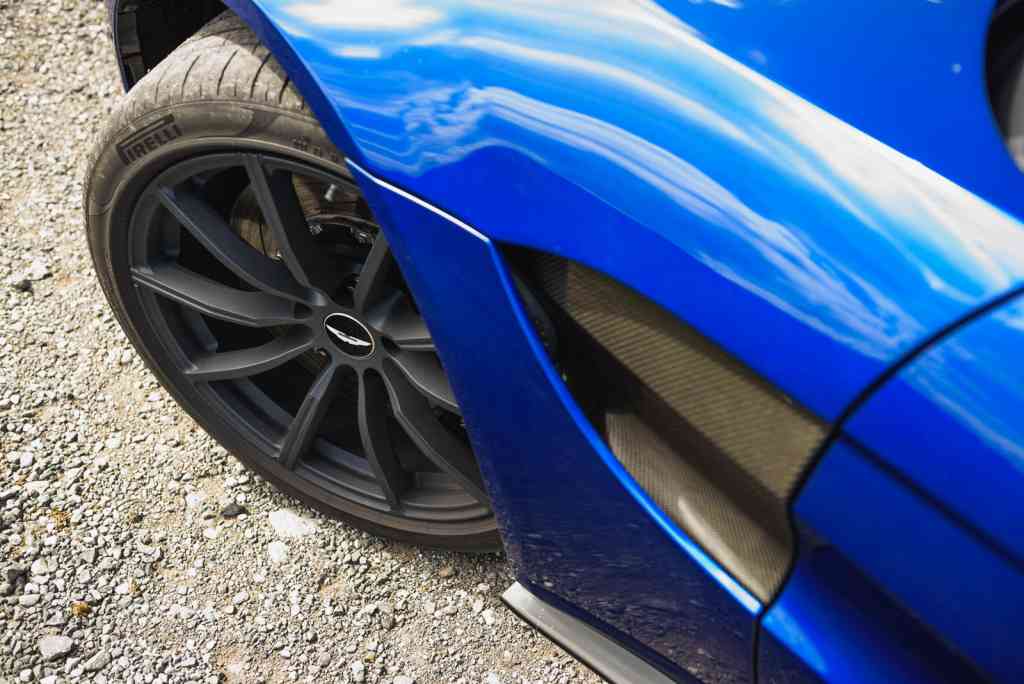 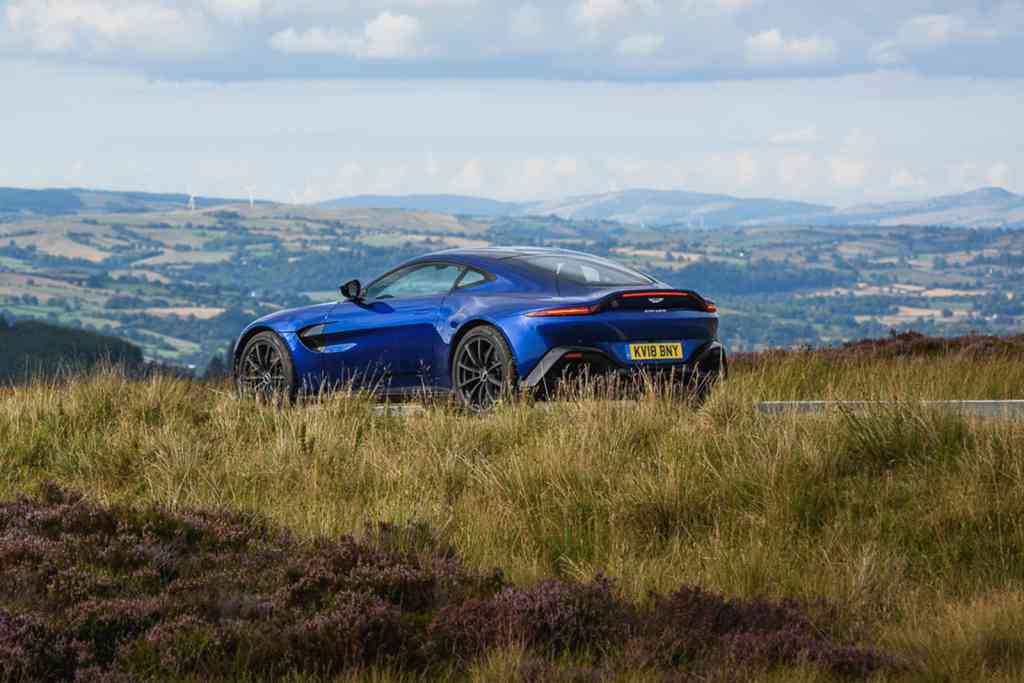 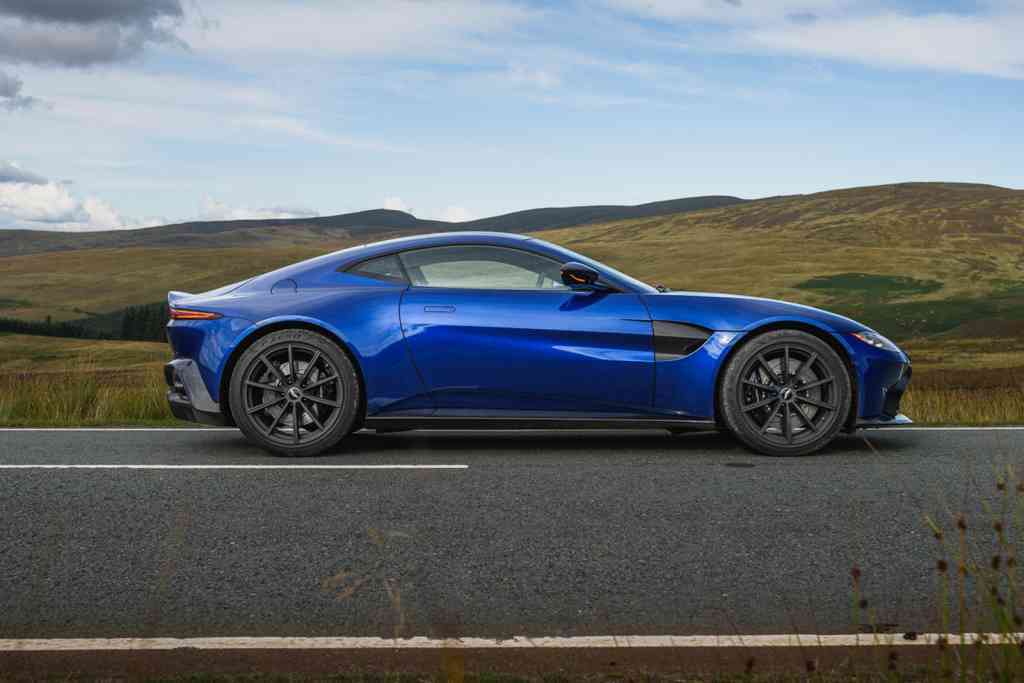 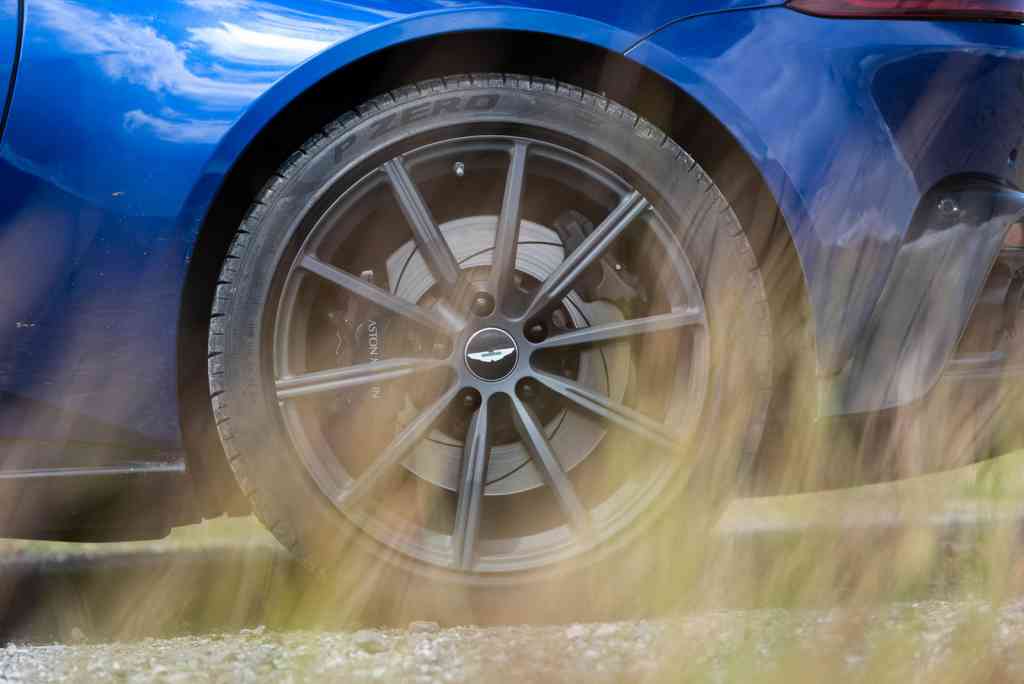 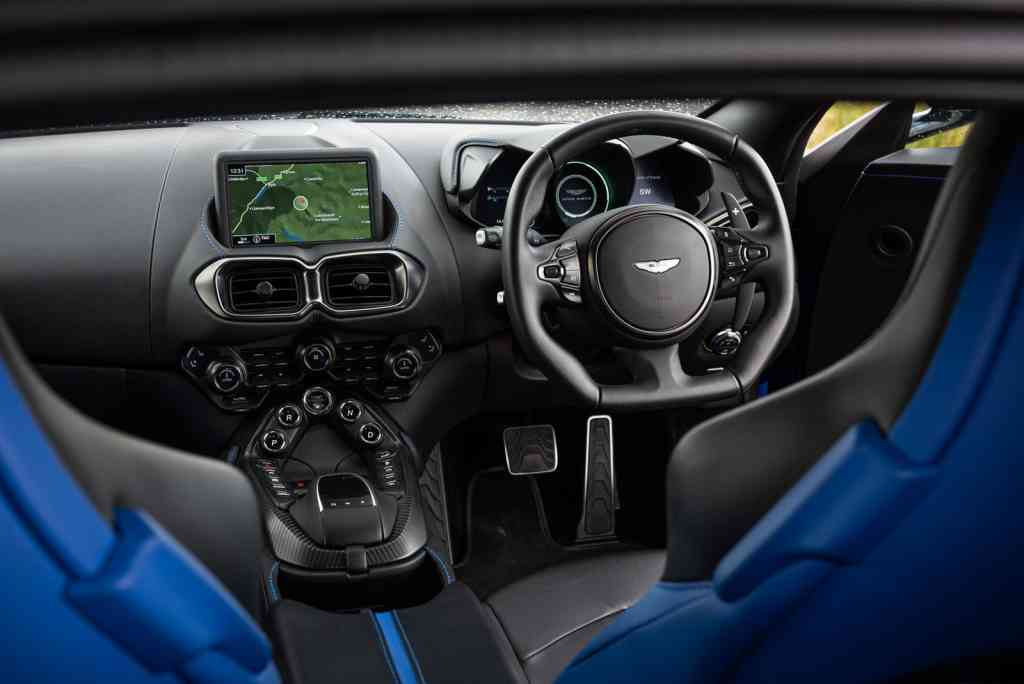 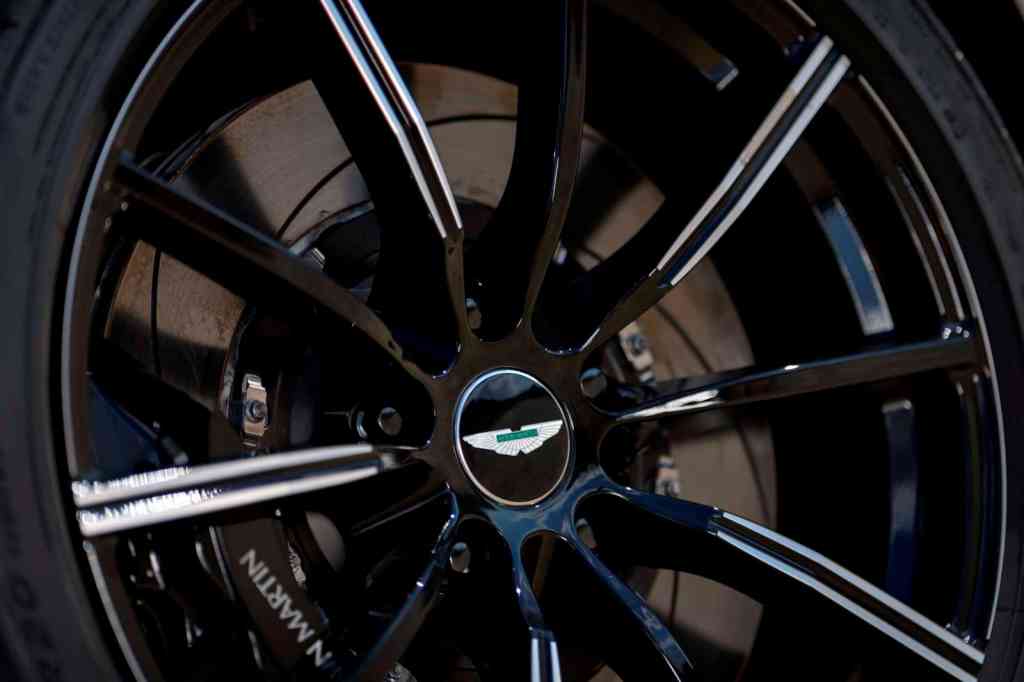 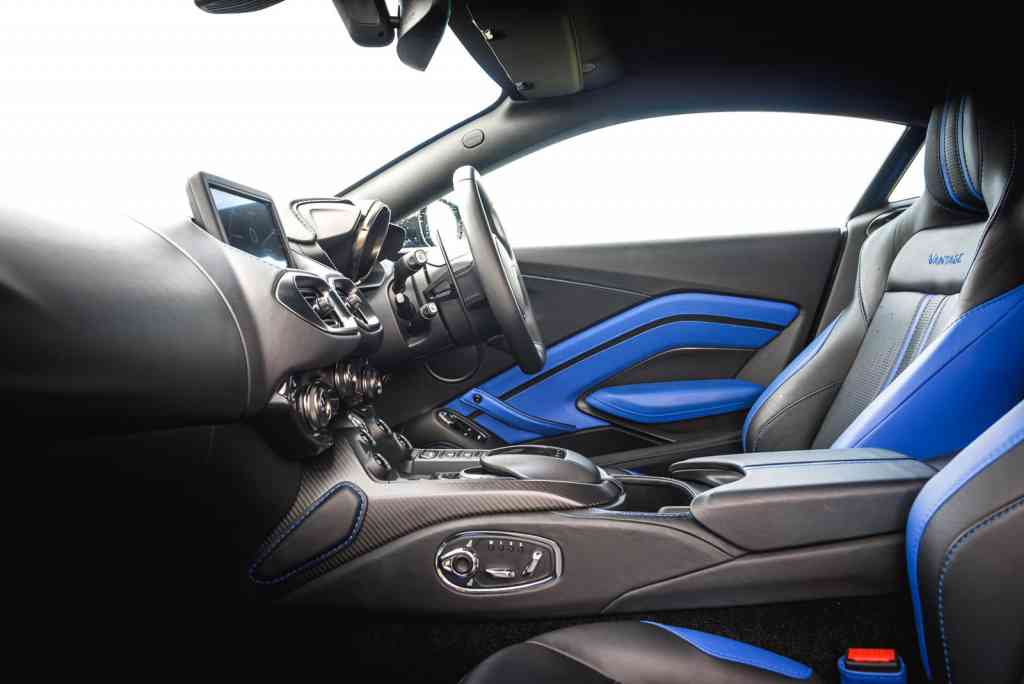 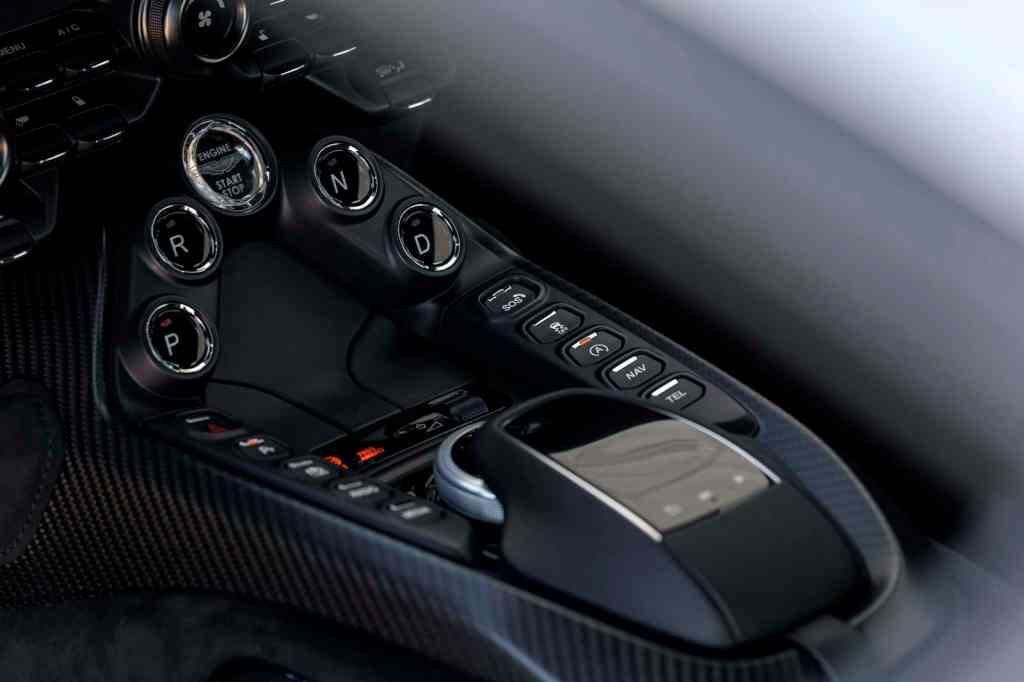 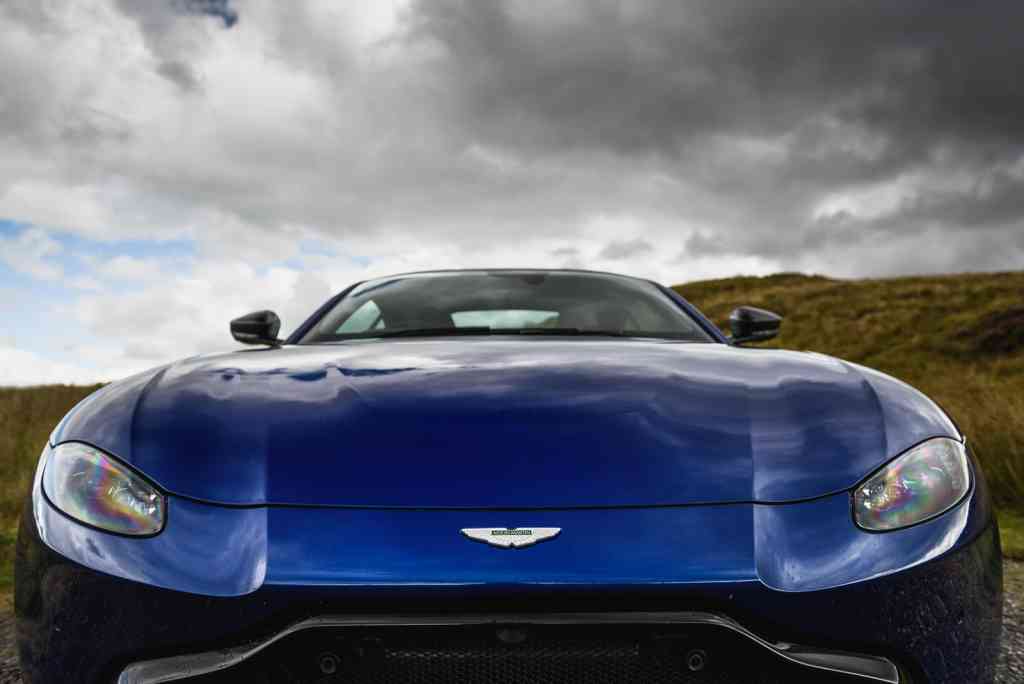 You may well have seen some of the more eye-catching colorways in previous coverage of the Vantage, up to and including bright yellow highlights on diffuser and other trim elements in a further subversion of Aston Martin’s traditional image. For my money the car looks better in the more reserved metallics, playing to the sense of menace conveyed in the looks. But, again, it’s great to see Aston Martin willing to stand out from the crowd and offer buyers a more extrovert look if they want it.

And it’s the same inside, the interior is a huge step-change from the cool minimalism of what went before. Gone is the 80s hi-fi look, the new Mercedes infotainment, switchgear and displays contained within a busier, more button-heavy look that is, thankfully, more user-friendly than the old car. The general quality is a little behind Porsche, Mercedes and Audi and if you’re coming from one of these brands the obviously hand-stitched nature of the dash leather and other trim elements may look a little quaint, though it plays to the fashion for all things artisan.

So much for the first impressions – there’s driving to be done. My 24 hours with the Vantage starts at the Aston Martin HQ in the UK’s car manufacturing heartland. The twisty country lanes at the back of the factory are often used for final shakedown testing but are narrow and busy – a car like this needs a bit of room and so I head off to the wide, open spaces of North Wales and the kind of roads where I can let it off the leash.

Wow, is this one noisy, aggressive feeling car too. I should have expected that from the looks but that pumped-up character is immediately obvious in everything from the sound to the hyperactive responses to the controls. Whether there’s some piped-in noise or it’s just the volume of the tailpipes there’s no escape from the V8, the engine tuned to sound very different from the AMGs it’s more commonly found in.

As on the DB11 you have thumb-controlled buttons on each spoke of the steering wheel to control driver modes, the right one doing engine and transmission while the left does dampers. It says a lot that there’s no comfort mode – you start in Sport for both, progress through Sport+ and then to Track. Cross country you can at least retain a softer suspension setting while going for a punchier response from the engine and gearbox, much as you can in a Ferrari with the handy ‘bumpy road’ setting.

Response from the V8 is absolutely fantastic, the fact you have eight cylinders and 4.0 liters to lean on before the turbos even kick in smoothing the transition from off- to on-boost. A welcome and familiar trait in the AMGs this engine also features in, but Aston Martin’s calibration seems to have brought out even more response and, while you can tell it’s turbocharged, you can haul from high ratios or let it scream at high revs as the mood takes you. Both are exciting, the big, column-mounted shifter paddles encouraging you to default to manual control rather than automatic and letting you play your own tune.

The choice of gearbox is interesting, given the Vantage is supposed to be at the sportier end of the spectrum and up against cars with predominantly dual-clutch transmissions. The eight-speed auto – rear mounted for 50:50 weight distribution – is a familiar unit and well-proven across a range of manufacturers. And Aston Martin has tuned it well, the shifts slurring smoothly in Sport mode and becoming more decisive and aggressive as you progress up. It can keep pace with a dual-clutch on upshifts and response is instantaneous but downshifts are sometimes a little slower than you’d want.

Where the Vantage really excels is in its handling and responses, the steering electrically assisted and using the same rack as the DB11 but, relatively, faster and more agile given the shorter wheelbase. The front-end is super positive, reacting smoothly to even the smallest input without feeling nervous or jerky. Feel isn’t as good as it was in the previous car but it’s up there with a 911 for precision and has been expertly tuned in harmony with the suspension, traction control and electronic locking diff to make the car feel as-one.

See also  2018 Aston Martin DB11 Test Drive Review: Making You Cool, Even If You're Not

For the average driver it feels fast, fun and aggressive without being too scary. For the more accomplished you can get hard on the throttle very quickly, fast turn-in followed by a decisive push from the rear axle that helps rotate the car into the corner and into oversteer as mild or wild as you desire. On the road and at sensible speeds you can enjoy the sensation of the steering unwinding in direct correlation to how much throttle you’re putting in; if you’re looking to showboat and lay down some rubber the Vantage will happily oblige you, though the short wheelbase and punchy power delivery mean you need to be on your game. Thankfully there’s a sense of this old-school balance even with all the systems – and safety nets – in place.

On paper you might be looking at the Vantage and thinking a Jaguar F-Type SVR does a similar job for a lot less money, given the price with options of my test car would be north of $180,000. For sure the Jaguar has a similarly muscular character and a brawny V8 at its heart. But for all the superficial similarities the F-Type is more souped-up GT while the Aston Martin is a proper, pure-bred sports car benefitting from the perfect weight distribution of its classic transaxle layout.

This distinction, and the romance associated with its badge, are what elevates the Vantage into a much more exotic sector of the market. Thankfully it has the style, substance and performance to sit very comfortably there and it’s pulled off the difficult job of replacing its celebrated predecessor in fine style. This is everything we’ve loved previously in Aston Martin and a whole lot more besides. Best of British? You’d better believe it.

On this topic: ( from category Aston Martin )
2019 Acura RDX Test Drive Review: Back From The Brink
Everything You Need To Know To Understand The Porsche 911 Model Range 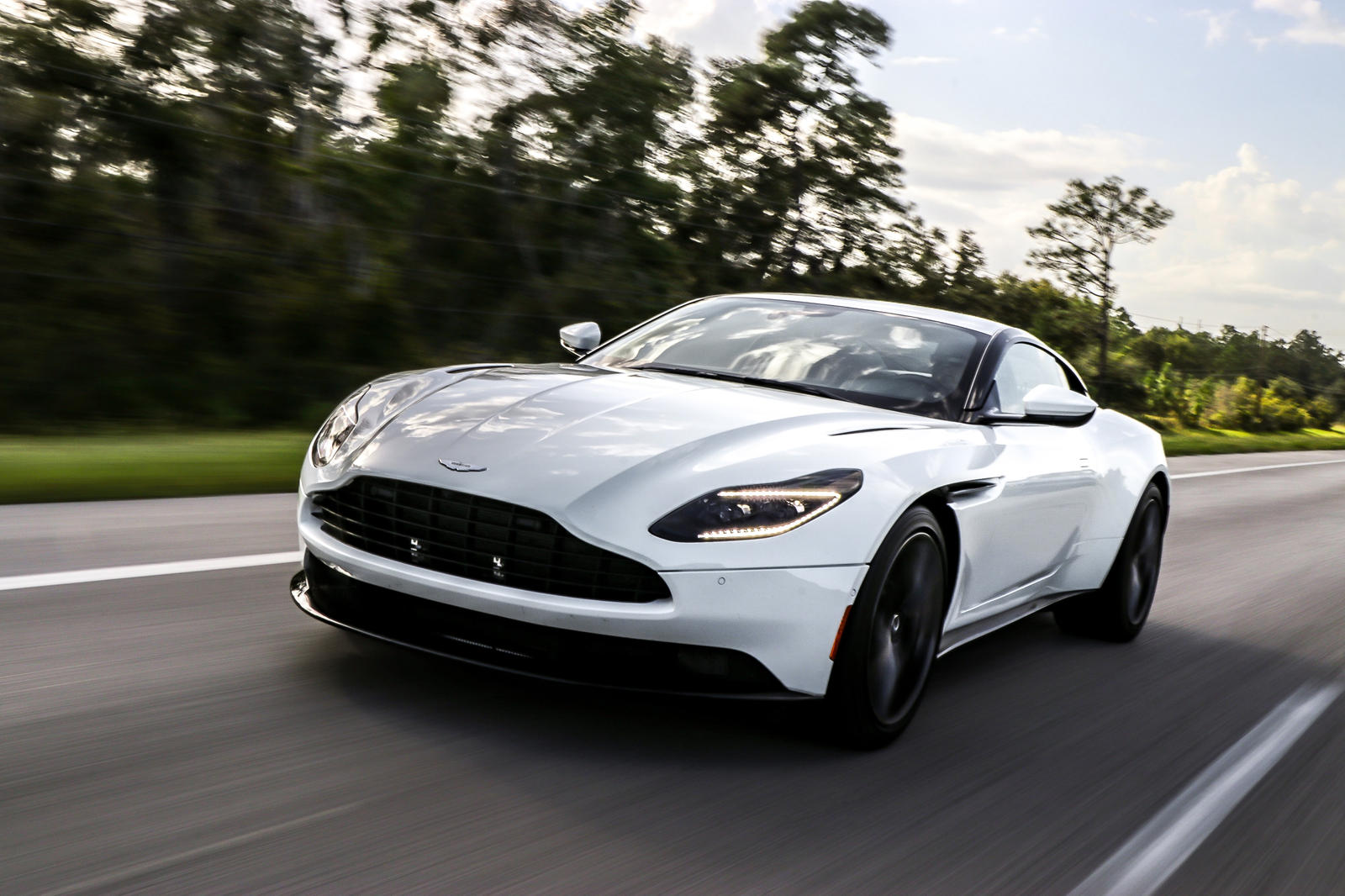 2018 Aston Martin DB11 Test Drive Review: Making You Cool, Even If You’re Not 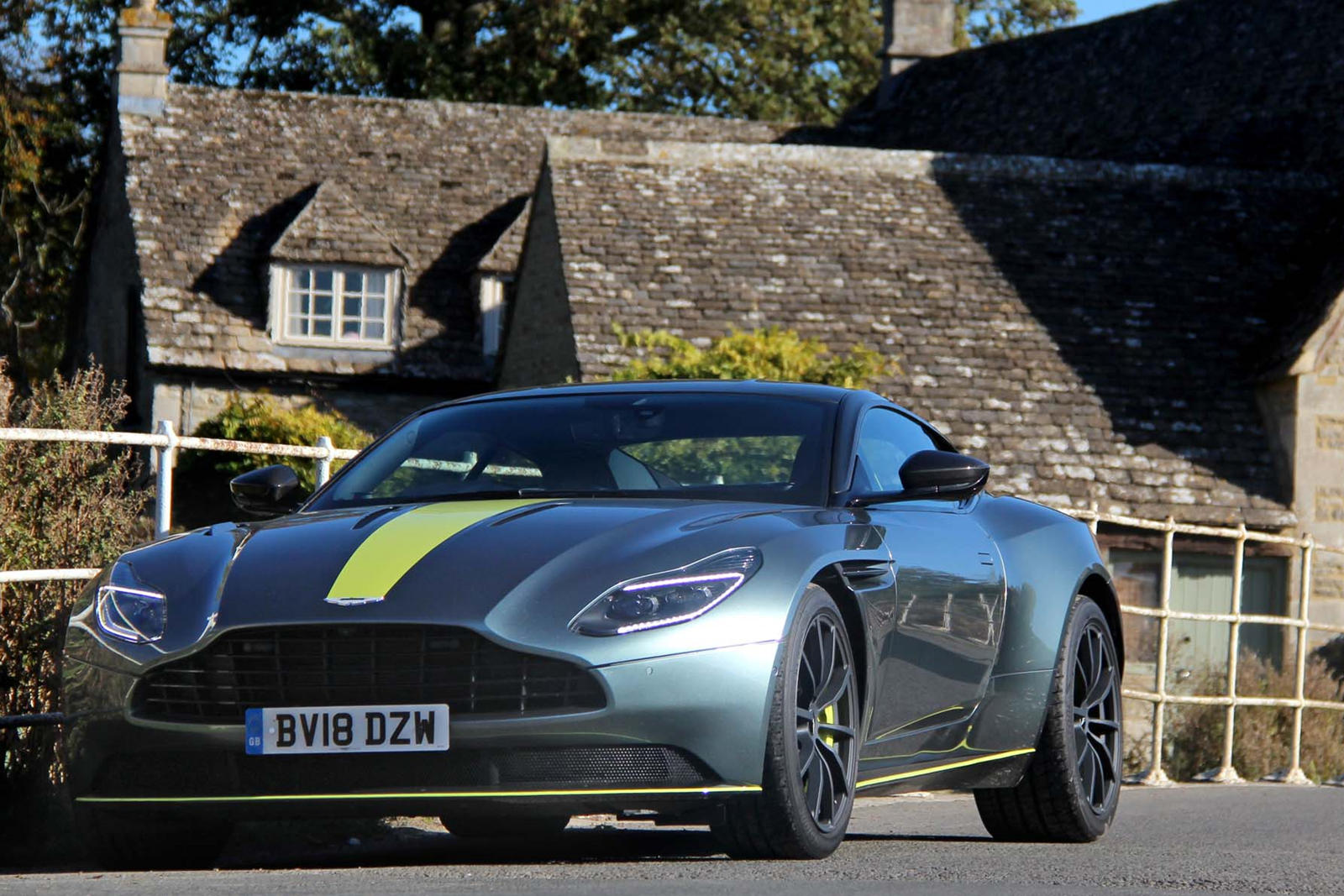 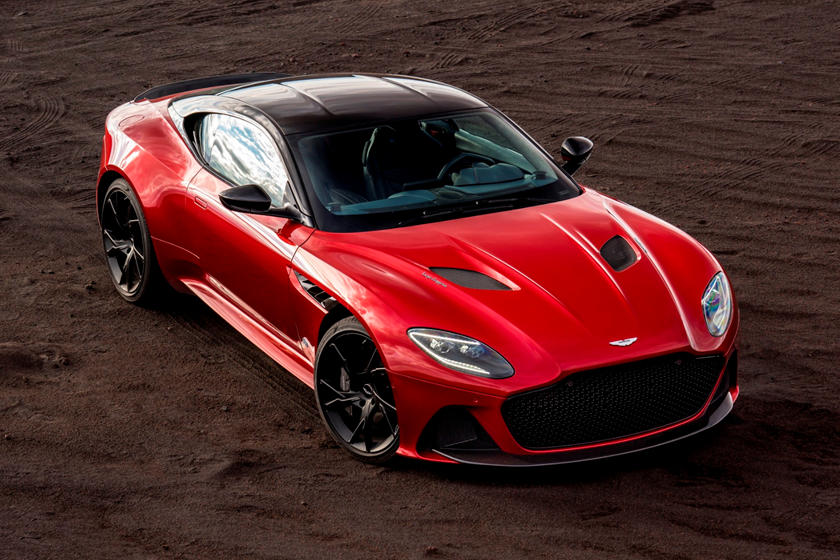