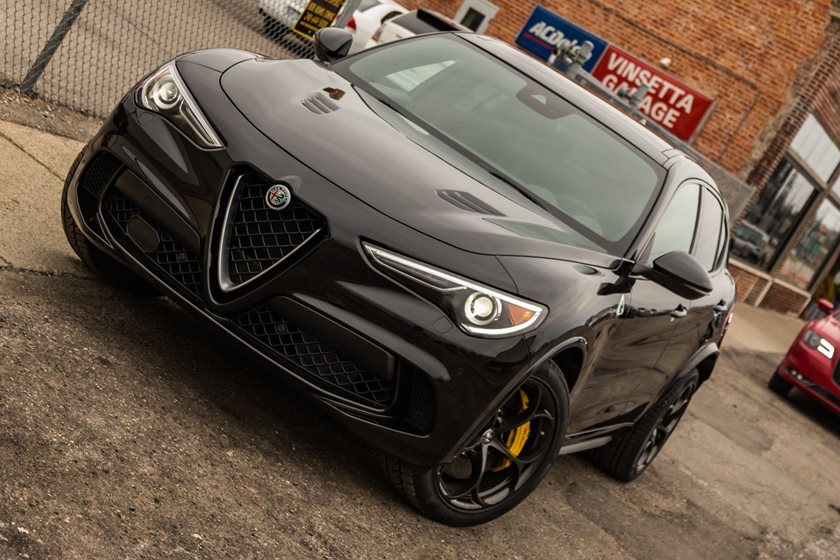 The Stelvio QV is a bargain considering the absolutely outlandish performance you get paired with SUV utility.

I’m here to officially notify you hell has certainly frozen over, pigs can fly, and tomorrow is the first Twelfth of Never. I know these indisputable facts for two reasons. One: in the run of a day, I had multiple members of the opposite sex wave at me from their cars while on the highway, the reason for which I will explain in detail later. The second: I’ve finally driven a properly sporty SUV that ticks all the boxes. Over two days in Detroit, I had the chance to experience Alfa Romeo’s first-ever SUV, the Stelvio, in its North American home.

But my tester wasn’t motivated by another run-of-the-mill 2.0-liter four-banger. I drove the Quadrifoglio—the one with the four-leaf clover applied to the fender—and I drove it like I stole it. How could I not? For starters, Alfa Romeo has given the Stelvio some lofty billing. It holds the current lap record for production SUVs around the Nurburgring’s Nordschleife—the North Loop—with a time of 7 minutes, 51.7 seconds. That time makes it as quick as a Lamborghini Gallardo LP 560-4… and the Alfa pulls off the feat with four fewer cylinders. The sprint to 60 is achieved in under 4 seconds in the Stelvio Quadrifoglio, and it’ll bend the needle until it reaches 177 mph.

To put that speed in perspective, a Lamborghini Miura P400 achieved a top speed of 171 mph in 1967, and it was the fastest car on earth at the time. The Stelvio is 6 mph faster… and about $900,000 cheaper based on today’s prices for a vintage Miura P400. But all these numbers are just that… figures on a sheet meant to stir the imagination of paper racers looking for the next 1-up car. For those who are genuinely interested in a high-performance SUV as a daily driver, I attacked the highways and byways to see where the Stelvio showed promise and where it fumbled. Under the hood lies the Stelvio Quadrofoglio’s beating Italian heart: a 2.9-liter twin-turbocharged V-6 engine producing a staggering 505 horsepower and 443 lb-ft of torque.

From this small-displacement performance mill, the Alfa recites a raucous number that rivals the Jimi Hendrix’s guitar solo in All Along The Watchtower. In its tamest drive mode, the Stelvio Quadrifoglio purrs like a newborn kitten, but clicking the DNA selector over to Race gives it a serious roar. At full trot, it won’t be mistaken for anything but a Quadrofoglio, and it emits the most delectable off-throttle overrun (the burble you hear when you let off the gas). The Stelvio Quadriofoglio makes full use of all the power on tap, too. Sending power to all four wheels is an eight-speed automatic and Alfa Romeo’s standard Q4 all-wheel-drive system. 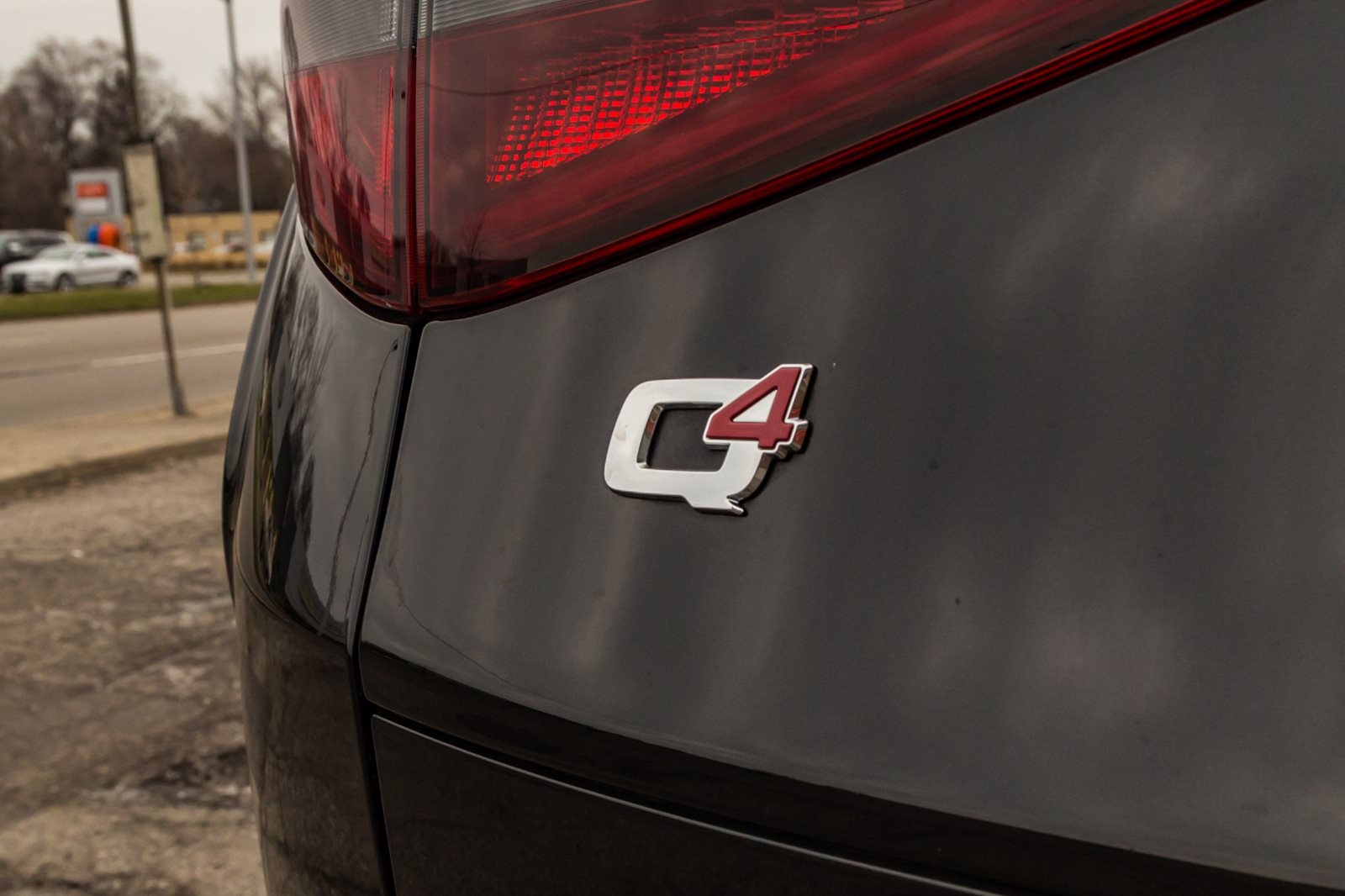 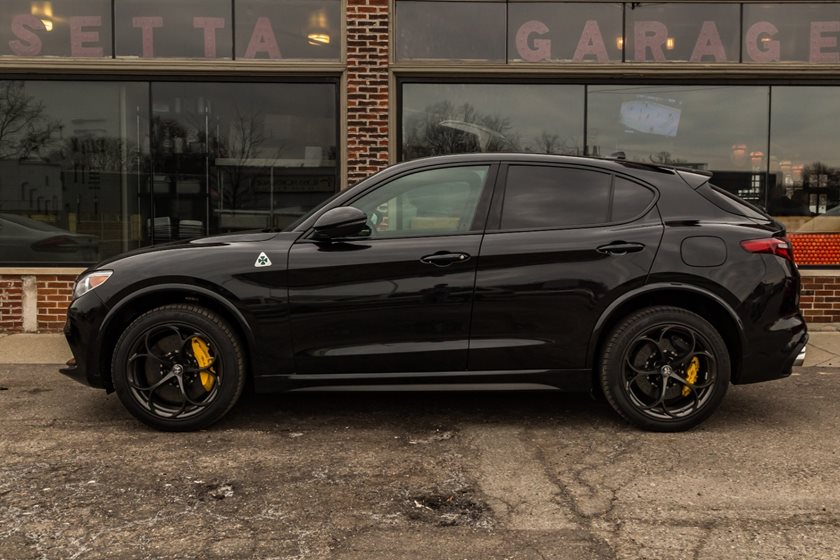 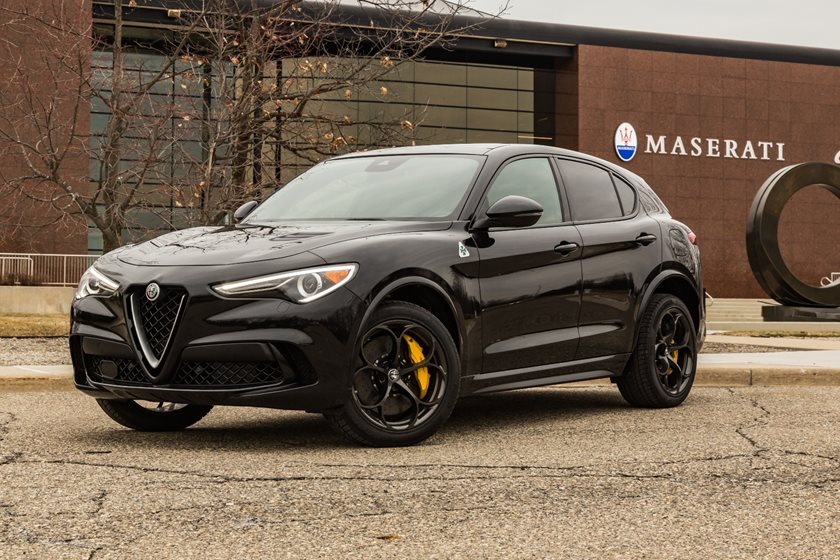 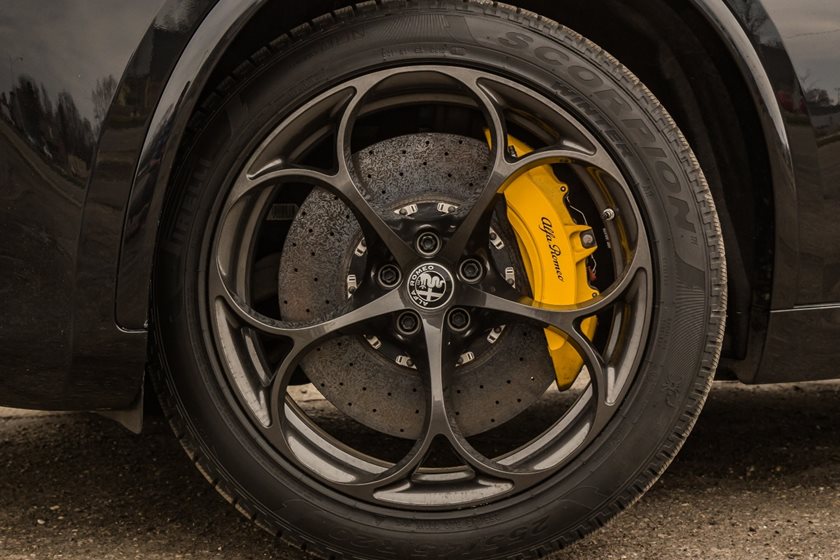 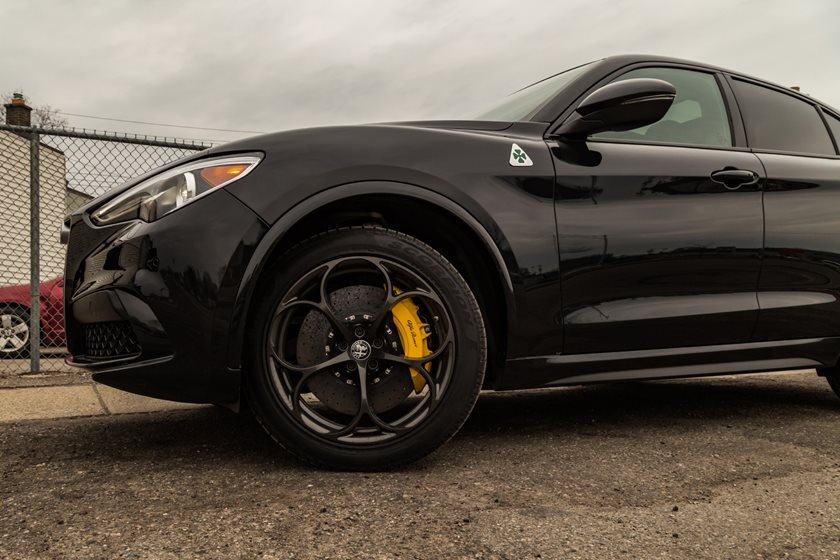 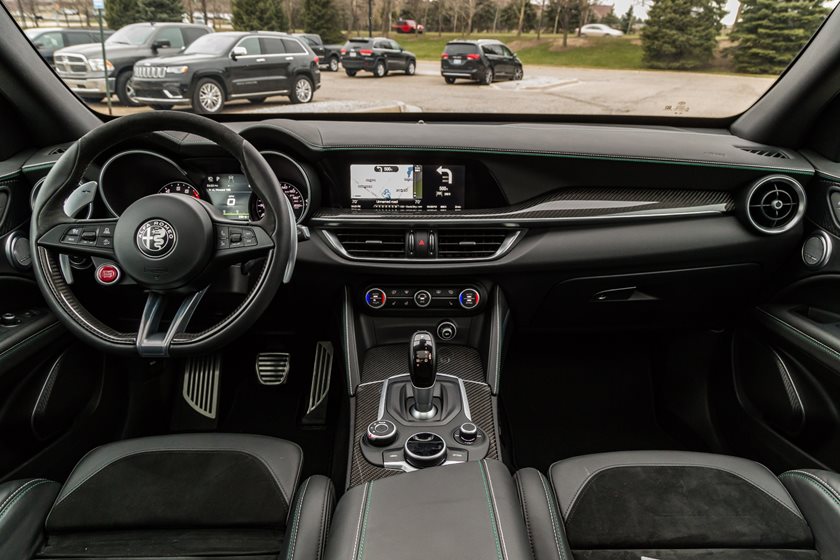 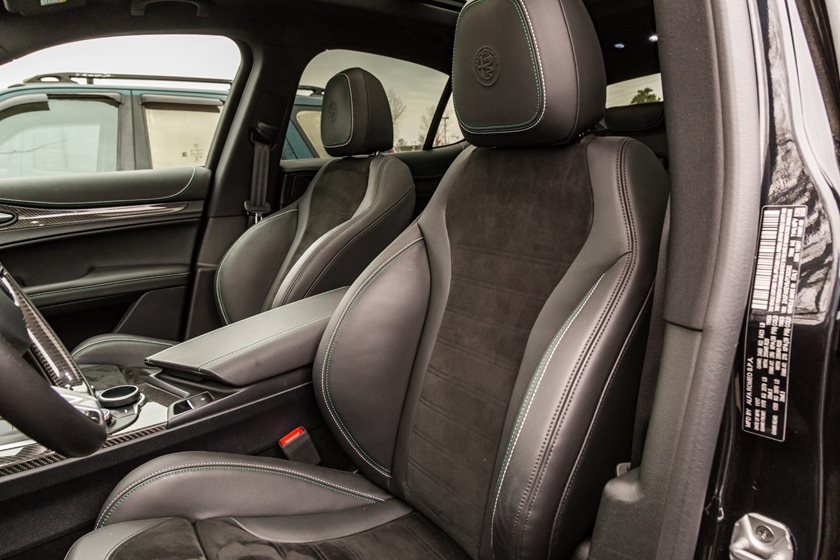 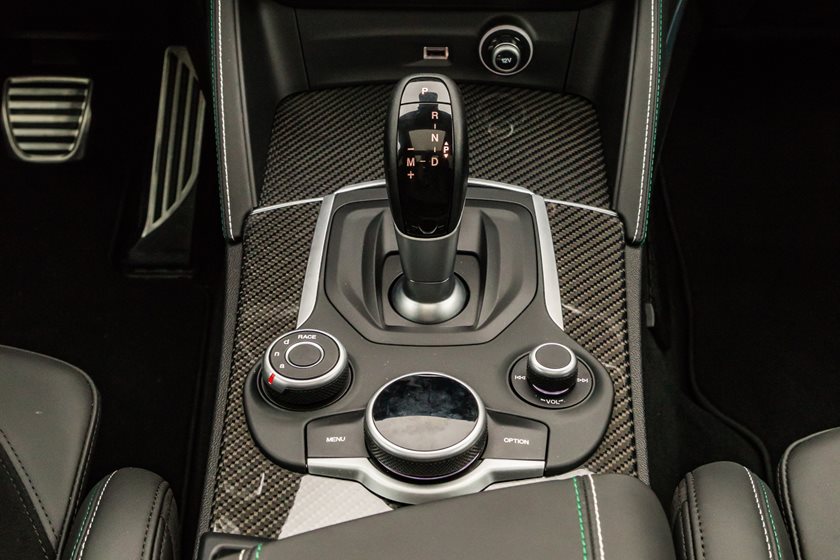 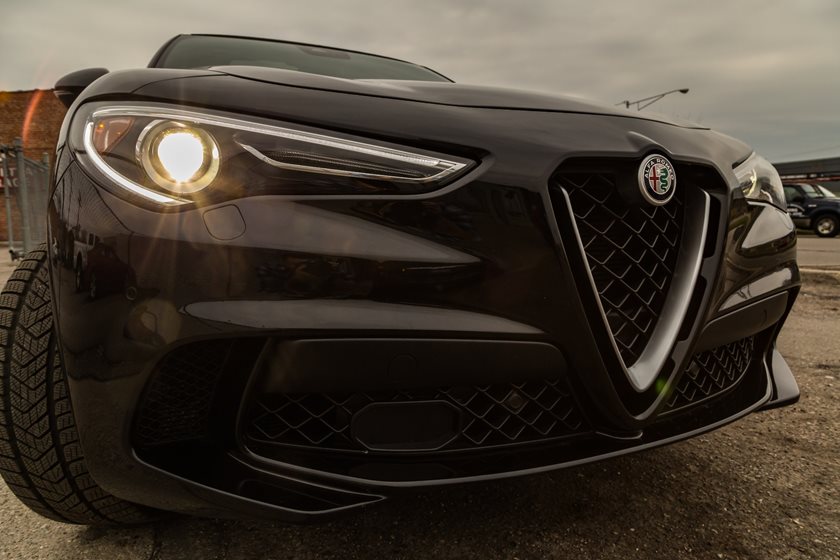 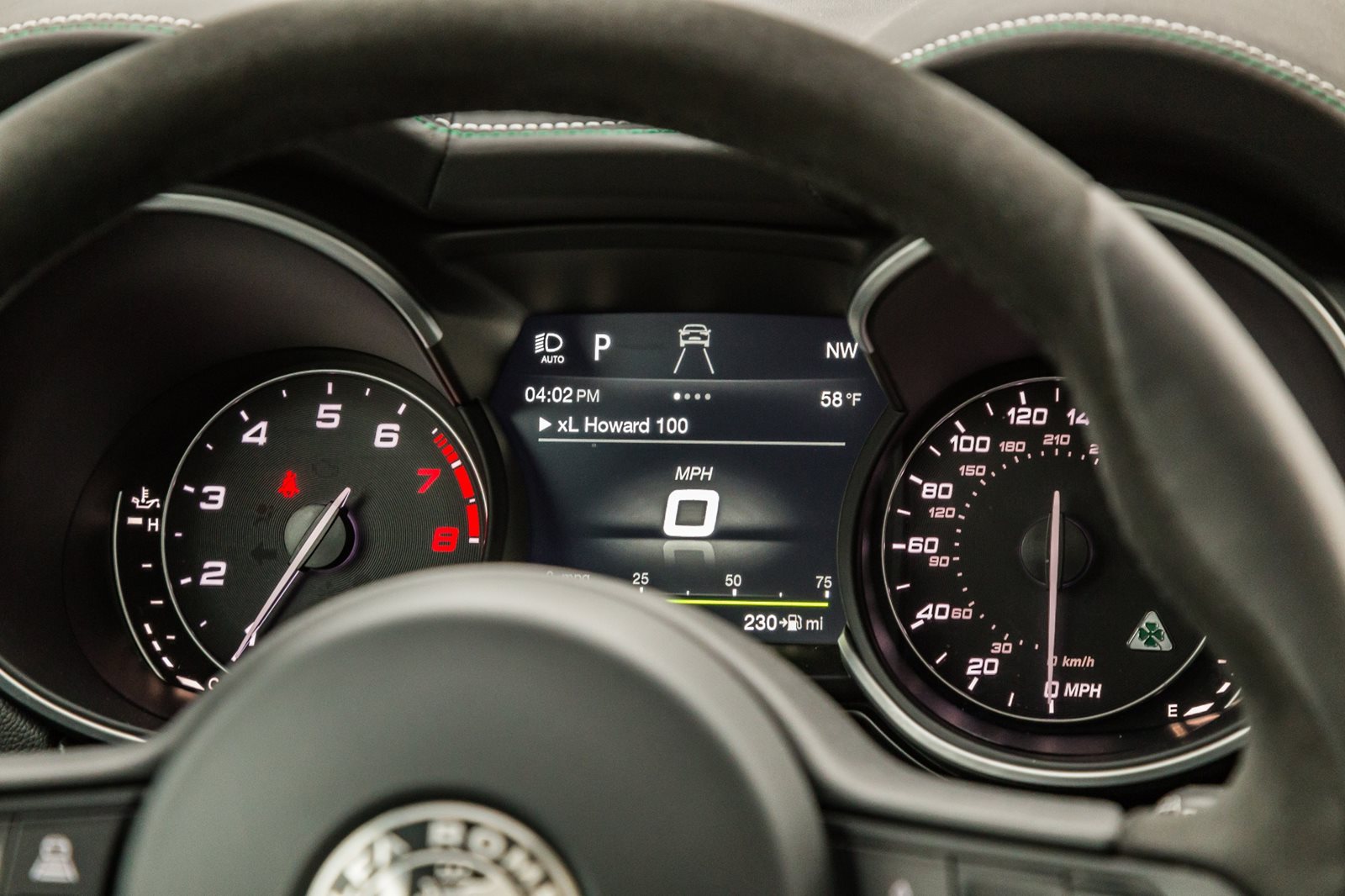 Off-the-line acceleration is borderline violent in Race mode as its wide rubber wrapped around standard 19-inch wheels digs into the pavement to provide monumental grip. I can’t overstate it enough. Acceleration from the Stelvio QV is properly shocking even when you already know how much octane is coursing through the Italian’s veins. Rolling pulls from 55, 65, and 75 mph also made my hair stand on end. Still, there is a downside to being in Race mode, especially in cities like Detroit. Bumps will make the Stelvio QV buck like a bronco. I’m not talking about the larger road imperfections, either. Expansion joints in concrete will upset the high performer, as will other ripples on secondary roads.

If you want all the blast without the jitters, the suspension itself has some adjustability for you to soften it up even when you have the Alfa’s engine and exhaust ranked up for maximum effect. Bringing all that speed to a stop is accomplished by either traditional steel high-performance Brembo brakes or optional carbon-ceramic Brembo brakes. This is by far where you can waste the most amount of money on a Stelvio. If you have no intention of pushing the QV for extended periods, you will not see any benefit from carbon-ceramic brakes beyond showing the cool-looking rotors off to your friends and foes; the standard brake package will do you just fine.

However, if you want the fade-fighting brakes for track use or, again, to flout your coin, Alfa is more than willing to relieve you of an extra $8,000 for the privilege. They’re also too grabby for street use and come with similarly astronomical replacement costs. This is your warning. Save your $8,000. Inside, the Alfa Romeo is simple, functional, and typically Italian in some good ways and bad. Optional Sparco carbon fiber seats offer more bolstering at the expense of adjustability, seat heating, and $3,500. For daily driving, the standard leather and alcantara seats will do you just fine. However, thanks to the Stelvio’s sea-of-black interior, you might be good opting for the $1,350 dual-pane sunroof to let in some extra light to brighten the place up.

Many critics have slammed Alfa Romeo’s infotainment system, but I got used to it quickly. Graphics displayed on the 8.8-inch screen were sharp, though its widescreen form factor does make for some awkward dual-tile placements, especially for navigation, which can be displayed in an incredibly small square section on the passenger side of the screen. One criticism I will agree with has to do with the infotainment system’s knob controller: it feels incredibly cheap. The click wheel-esque controller feels hollow and like it could snap off at any moment. It’s trimmed with a plastic disc at the top that’s easily scratched. But it simply feels cheap in the hand, and that’s what bothers me most considering the Alfa will set you back at least 80 large.

Much like its little brother, the QV also comes with Android Auto and Apple CarPlay, so at least those who don’t like Alfa’s infotainment system can use an interface that’s more familiar to them. But the best part of the Stelvio has nothing to do with how quick it is, how gorgeous it is, or how comfortable it is. When you own an Alfa Romeo, you immediately become part of a very special club. The Stelvio club is growing in Detroit, and my anecdotal evidence seems to suggest its as much or more populated by women than it is men. As I cruised along Detroit’s Woodward Avenue, its Interstate highways, and even some of the more flung-out secondary roads, I came upon Stelvios here and there… and nearly all of them were driven by women.

And they were all friendly. As I would drive by in the QV, those driving other Stelvios would happily give a wave, a wink, or a giggle. It’s like a sexier version of the Jeep Wave. It’s flirty. It’s Italian. And I hope it never stops. All told, the Stelvio is a bargain considering the absolutely outlandish performance you get paired with SUV utility. If I had $80,000, it would be hard to say no. Willingly buying an Italian SUV new for $80,000? Jeez. Hell has truly frozen over.